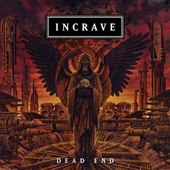 Having never heard of Incrave prior to this review, I had no idea what to expect from "Dead End", the latest offering by these young Swedes. Gauging from the cover artwork and the band’s Swedish pedigree, I prepared myself for some death metal, perhaps along the lines of Dismember or "Wolverine Blues"-era Entombed. Suffice to say, I was wrong.

"Dead End" is power metal, and powerful power metal. The opening track, Shattered, is a very well-crafted piece of Scandinavian metal. It’s apparent within the first minute that these guys have talent, vision and originality. Shattered is a mature song from a relatively young band, complemented by a strong lyrical approach, above-average vocals and a healthy chunk of style.

The Forgotten and A Shadow in the Dark are two very competent tracks, similar in scope to their predecessor. The musicianship in both songs is exceptional, providing yet another testament to the strength of the Swedish music scene, in both talent and significance. Another aspect that really highlights the maturity of this band is the refusal to inundate their songs with unnecessary keyboard interludes. The keys are used sparingly and add a perfect amount of lushness and atmosphere.

The mood is shifted to a slightly darker place with the onset of The Touch of Death. Where many albums start to lose their intensity and originality, "Dead End" moves from aggressive to assaulting. The Touch of Darkness is raw without being primitive, and compelling without being abrasive. Vocalist Johan Falk sounds like a younger Dirk Thurisch of Angel Dust, displaying a sharp ability and range behind the mic. The band surrounding him is obviously very talented, but their most definitive asset is the moderation and restraint that they exude. There is no virtuoso here, just quality and catchy metal.

Unveil The Death treads down the same darkened path that The Touch of Death traversed while Shades of Me spins "Dead End" in yet another direction. Shades is an imaginative song, incorporating piano and innovative keyboards into the somber mix. An Empty Soul propels things forward with quickness and ferocity, destroying anything in its path.

Scream to Silence showcases some of the best vocals on "Dead End", while the guitar blisters and burns. The keyboard melody is straight out of a Norwegian black metal intro, complete with the fierce frigidity and isolated feeling. No inverted crosses and flaming churches here, though. Incrave defiles with their music, not their imagery.

The album comes to a close with Nevermore and the title track, Dead End. Nevermore is just brutal, providing the tightest and most vivid selection on the album. Everything that "Dead End" hinted upon previously culminates at Nevermore. The last track, Dead End, is another furious and inspired cut, albeit not as impressive as Nevermore. "Dead End" reintroduces many of the qualities that were apparent in the first half of the album, including thick choruses and guitars dripping with juice.

My first experience with Incrave ends up being a very enjoyable and unexpected journey. The album is innovative, unique, vicious, and eloquent. If "Dead End" is any indication of what Incrave has in store for the future, this is a band to watch, even amongst the hordes of stellar metal artists in Sweden.