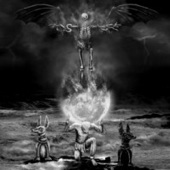 Alghazanth is a Black Metal band from Finland who have been around since the mid-90’s. They were originally formed by two members, Veilroth (no longer with the band) and Gorath. After going through a few changes in the line-up, they eventually settled with Gorath Moonthorn on drums, Grimort and Thasmorg on guitars, Ekholm on synths, and finally Goat Tormentor for lead vocals and bass. When listening to Wreath of the Thevetat, the chemistry of the existing members is noticeable.

I really do not know what to say about Wreath of the Thevetat other than it is a solid album from front to back and back to front. The first track on this album, “Moving Mountains”, gives you a chill when you hear Goat Tormentor deliver the lyrics like a mad man from Hell. “Moving Mountains” clocks in at over six minutes long, but it doesn’t seem long enough; the listener would wish that the song was even longer. Each track on this album has a certain individual feel to them and takes you on a journey into the unknown. When listening to the song, “On Blackening Soil”, I can literally close my eyes and picture myself walking through a forest lit by the pale moon sky with the stench of death all around me as fog rises from the ground to my head, overtaking my body, transporting me to a different place.

Nearly every song on this album measures over at least five minutes long so they give the listener a chance to appreciate what they are hearing. Even though the whole album is great, some other notable songs to check out on Wreath of the Thevetat are: “The Phosphorescent”, “The Kings to Come”, “Rain of Stars”, “Future Made Flesh”.

The production of this album is beautiful. These guys get it. It’s not all about turning up the volume and distorting the drums. Each bang of the drum is as clear as the next one and delivers a pop that I haven’t heard in a while. Each song on Wreath of the Thevetat sounds just as crisp and clean as the next one.

There is not one bad song on Alghazanth’s Wreath of the Thevetat release. In fact, it’s very rare that one can find a Black Metal album, especially now days, that is completely flawless. It’s hard to explain, but this whole album will make any listener feel powerful and immortal. That’s how this album hits your very soul. Every Black Metal fan needs this album.