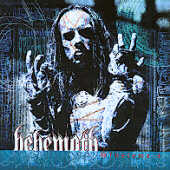 Taking the next logical step from where their previous album "Satanica" left off, Poland's Behemoth have created an amazing album. The musicianship is extremely tight and technical. Despite the technicality and "controlled chaos" feel, the album flows very nicely together as a whole. There are no obvious standouts on this one, as all the tracks are quite excellent.

Inferno's drumming is amazing, the man is a machine, he is busier behind the kit than a one legged man in an ass-kicking contest! Just check out 'Christians to the Lions' for a prime example of this. Nergal and Havoc's guitar work is equally as powerful, with both guitars building off of each other to create some truly amazing, f***ed up sounding riffs. No credit is given for the bass guitar, but it is definitely there giving the music a strong backbone.

"Thelema.6" is brutal as hell, but doesn't rely on sheer aggression, as there are a few well-placed slower sections. One of the best things about this album is that it makes the listener want to put it back in their c.d. player often, because it is constantly revealing more of it's secrets with each listen. While at first listen, the album sounds a little shallow, after a little more time, the depth of this album really comes out. There really isn't any band that I can think of that sounds like Behemoth, so it's hard to make comparisons, but if you like "Satanica" you will love this album, as it has surpassed it's predecessor in every way. The bonus tracks all kick ass too, which is a nice surprise given all the half assed bonus tracks that have been appearing on albums lately.

Bottom Line: If you’re a fan of brutal, technical death/black metal with a "modern" sound, this album is a must.