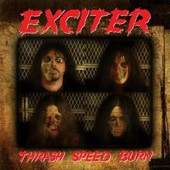 Exciter are among those bands (like Flotsam And Jetsam to name just the best known example) which have to battle with their own glorious past. Their curvy development is a good example for a lot of other more or less extreme metal groups. At the beginning of their career they released spectacular thrash / speed albums (from "Heavy Metal Maniac" till "Long Live the Loud") before they or their management unnecessarily decided to change direction in order to achieve greater commercial success. After this change had proved to be false, the band tried to restart while reanimating their early metal style. Unfortunately, the Canadians had to learn painfully that it is impossible to make a trip into the past - quite apart from countless line-up changes. They returned to the mixture of thrash and speed, but what looked alike turned out not to be the same.

This applies in particular if, as in the present case, the rumbling production fails to perform its duty. I don´t want to speak of an undefined sound mush, nevertheless, the album sounds like a low budget work and the songs can´t develop their full striking force. I can´t understand how this could happen, because I thought that all band members are professionals who are highly aware of the importance of a powerful sound. The cover is a flop, too. Not just because it strongly reminds one of the back cover of Krokus´ "Headhunter", but also because it looks cheap and done lovelessly without having any apparent relation to the title of the album.

Fortunately, the music speaks for itself without taking account of these circumstances. Exciter unleash a formidable headbanging mania right from the beginning of the opener. The new vocalist Kenny Winter does not sound too shrill and he manages the deep tones, too. Nevertheless, he does not have this special charisma that Beehler had in the early days. The rest of the team fulfills its duty, which is not a huge challenge due to the simple song structures that avoid tempo changes and complicated rhythms. This does not mean that the songs are boring in any way. To put it in positive terms, they get straight to the point and are clearly structured. Successful examples of this are killer tracks like the title cut or the even more prominent "Demon´s Gate". Admittedly, it is certainly no coincidence that I highlight this very dynamic song, because its aggressive riffing reminds me of the fantastic title cut of "Violence & Force" in the most pleasant way. Moreover, it seems to me that these songs are twins and Exciter just kept "Demon´s Gate" hidden for more than 20 years. I regret the fact that not all of the songs share the rapid pace of this tune, but however, the fast "Massacre Mountain" constitutes a good choice for a representative opener, also with regard to its simple chorus that is effectively supported with backing vocals. The slow or mid-paced songs, for example "Evil Omen", interrupt the speed inferno without any loss in quality, while the lyrics of all pieces deal with the usual topics. Everybody knows what to expect after reading the song titles, so that there is no reason for a deeper analysis.

It would be an exaggeration to speak of a late masterpiece, but Exciter deliver a coherent album with powerful songs that would have doubtlessly deserved a better production. Nevertheless, it is just good to know that John Ricci still remains true to himself. But it is a pity for a sentimental guy like me that neither Dan Beehler nor Allan Johnson were involved in this tradition-conscious output.

This band basically were the straight out godfathers of Thrash Metal in Canada... along with others like Infernal Majesty and Razor in the 80's. I was one of their biggest fans, and saw them once when they had played in my home town at the height of their popularity back then. Now, I sort have been let down as I hear this new album.

"Thrash, Speed, Burn" was sort of a great name for the new album, although Exciter were probably not thinking of it in the way I am. The band does still very much 'Thrash'... very good in fact, showing that time has not deadened the power that this amazing quartet has shown over the two decades plus they have been around.. Next is the word 'Speed', and is referenced thorough the fact that they do have major riff capabilities in a big way. They can still play at an amazing rate of speed, showing that they all have became very accomplished at what they were doing through out the years. Sadly the last word in the album title, 'Burn', described that even with all of this constant and very amazing talent they still hold, the album as a whole just seems to fizzle out and tragically dies. The album had great potential for an amazing sort of comeback for the Canuck thrashers, despite sounding a little dated throughout... the album just seems to not stay with me and makes me hungry to hear more from them from the past. I am unsure of exactly what it is with this album, but it just seems to never get going.

Exciter might get some new fans, and some of them will go back and revisit some of their older releases (I would recommend the classic LP "Violence And Force")... but for a old thrasher like me who remembers the early scene, "Thrash, Speed, Burn" was simply a more than just little disappointing. It was a let down, but not a out and out heartbreaker either. We will just say it was sadly average and leave it at that.