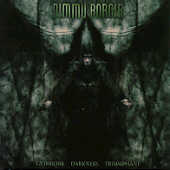 Everybody knows that Enthone Darkness Triumphant marked the breakthrough for Dimmu Borgir. Of course, a financially strong company like Nuclear Blast made it easier to catch the attention of the scene. A clever advertising strategy, a well-developed distribution network and a flawless production were important pillars for the success of the album. Well, honestly speaking, I thought it is a flawless production at the time of the output’s release. Today, the 56 minutes sound pretty polished to me, overloaded by keyboard sounds and without the necessary meanness each and every black metal album, even a symphonic one, should have. This does not mean that I do not like the mix. It scores with its full, warm and profound sound, but I would not call it flawless anymore.

However, a solvent company alone does not guarantee a classic, but Enthrone Darkness Triumphant is definitely an album that deserves this commendation. So, what were the further factors that catapulted Dimmu Borgir at the top of the black metal scene? Well, they came from Norway, the genre’s new epicenter (doubtlessly an advantage back in 1997), they had the finger on the pulse of the times and, last but not least, they had forged impressive songs. Unfortunately, exactly the opener does not belong to my favorites, although it generally enjoys a high reputation. From my point of view, 'Mourning Palace' is pretty lame, consensus black metal that fails to uncover the grim face of the subgenre. The flickering keyboards are slightly annoying, great melodies are missing and only the instrumental part in the second half features more or less vigorous guitars. Yet there are also tracks that still make my blood run faster. The band reaches its absolute climax with 'Tormentor of Christian Souls'. This song combines gloomy keyboards with aggressive, fast and straight rhythms, the guitars do not fall by the wayside and the vocals show the adequate degree of diabolic vibes. Every second of this number fascinates me. The infernal aura is perfectly combined with metallic belligerence and the track shines with pure energy and dynamic. The similarly constructed and equally demonic 'Relinquishment of Spirit and Flesh' also shows the formation in top form, not only in view of its maelstrom-like rapid sections.

Nevertheless, broad parts of the full-length put the emphasis on mid-harsh, melancholic, more or less gloomy parts. I would not call them romantic, even though abrupt, relatively soft breaks like one in 'Prudence’s Fall' faintly point into this direction while revitalizing the aesthetics that gave Stormblåst its face. Dimmu Borgir love to wallow in pain and desperation, but they do not do it in a kitschy way. The (regular) closer 'A Succubus in Rapture' bundles the strengths of the band. It connects attacking mid-tempo parts with softer yet licentious sequences. I would not say that every single note hits the nail on the head, but Dimmu Borgir had style, class and a clear musical vision. It is therefore no surprise that the bonus track on the eleventh position of the here reviewed edition keeps the quality level. Moreover, Raabjørn speller draugheimes skodde” adds a little portion of local color, presented by a band that was definitely in a process of internationalization.

Under the bottom line, there can be no serious doubt that the song material was the main reason for the impact the album made. By the way, did I already mention the grandeur and power of the galloping 'In Death’s Embrace'? Okay, some brilliant moments, for example the spooky beginning of 'Spellbound (By the Devil)' with its overwhelming melody, do not generate equally brilliant but “only” very good songs. Yet there are almost no fillers to find and even the less strong pieces mirror the tremendous potential of Dimmu Borgir in 1997 – the guys just were not always able to transform it into fantastic tracks. However, Enthrone Darkness Triumphant was strong enough to establish the Norwegians on an increasingly controversial yet very prominent position in the black metal universe. Then came Abrahadabra. Is this a synonym for downfall? Either way, that’s another story.

"Enthrone Darkness Triumphant" was heralded as album that Dimmu Borgir officially became "sell outs". This is a complete and utter load of bollocks. Dimmu Borgir did not sell out, they became popular. This is Dimmu Borgir’s second greatest release in their 7 or so year history (the finest being "Stormblast"). Shagrath, Stian and the rest of the mob acquired Peter Tatgren and the infamous Abyss Studio to the recording for this magnificent symphonic release, obviously the production rate is quality, and this really helps to bring forth every instrument, that you may have not been able to hear on "Stormblast". Stian Aarstad is again responsible for tying this whole production together. When Dimmu Borgir cut Stian loose they unofficially signed their own death warrant.

Aside from that, all elements really come together well to create a masterful epic piece, they really shot Dimmu Borgir into the limelight. Favourite tracks for me include, the opening killer 'Mourning Palace' which for some reason reminds me of Enya-esque melody, regardless it contains great interplay between synthesizer and guitar. 'In Death’s Embrace' is one of the best of examples of symphonic black metal on the entire album. 'A Succubus in Rapture' is the longest track on the album and really has a nice epic feel to it. Also worth noting is that Shagrath’s vocal have improved quite significantly. However, whether Shagrath improved for the better or worse is worth questioning, because as he got better, Dimmu Borgir got worse.

Bottom Line: This was the last album of the good Dimmu Borgir, additionally this was seen as a commercial and "sell out" release. I don’t really care, this is a great symphonic release, from what was once a great symphonic metal band.