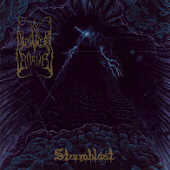 Dimmu Borgir's second full-length was their last album before the hype set in. Well, however you look at it, Stormblåst does not shine with compositions that can cause (justified) enthusiasm. It boasts with a truly impressive artwork, but the musical content fails to impress as well. The album shows a band that has taken the first steps without being already able to make the best out of its potential. Tracks such as "Broderskapets ring" uncover the talent of the guys to combine heaviness with melancholy in a pretty strong manner. The dragging guitars guarantee a heavy fundament and the hoarse, slightly overproduced lead vocals - not the spoken vocals - contribute the black metal element. But the most exciting thing is the short piano line with nine tones that appears from time to time. The track scores with a very natural flow and loneliness and yearning shimmer through every tone of the keyboards (guess my description is slightly kitschy, isn't it? I apologize). Anyway, "Broderskapets ring" (and further songs) made clear that black metal is more than malignant fury and "Christ-raping" aggression. The album has more songs with more or less meditative parts and this facet gives Stormblåst a pretty unique appearance.

In view of its representative duties, it seems only logical that the title track holds some slow-moving sections as well. It starts with a short outburst of violence, but relatively mild harmonies with almost feeble background vocals gain the upper hand quickly. The keyboards have a comparatively big part on Stormblåst with the effect that the album is not too far away from Gehenna's "First Spell". This is meant as a compliment, because Dimmu Borgir are able to elicit the keyboards some fantastic lines. The title track's break after three and a half minutes gives way to an instrumental section that offers fascinating, almost dreamful yet appropriate melodies. Dimmu Borgir offered their first creative highlights after the lukewarm debut - but this is not to say that everything worked in a flawless manner. Sometimes the keyboards ruin a song, just listen to its feeble chirping in the seventh track. Even worse, the band is on the wrong track from time to time. The flabby instrumental "Sorgens kammer" is free from any form of metal but equipped with a playtime of seven minutes - don't ask me why. (And the miserable story behind the song completes the picture, just read the "additional notes" on this website.) Finally, it becomes obvious that the material at the end of the running order does not reach the level of the highlights which mainly shape the album's first half. Great dramatic moments and tasteful melodies are mostly missing.

The production lacks penetrating power, but it generates an eerie atmosphere that fits the artwork very well. Some sound effects go wrong due to too much reverb, but I don't want to be too picky. I like the sound of the album and that's why I was not interested in listening to the second version of the album which was released some years ago. The here reviewed original edition was the final work of Dimmu Borgir that "came out of the woods", if you know what I mean. Regardless of the quality of the single songs, it spreads a somehow credible emanation. A little bit more poison, a little bit more velocity and a little bit more coldness would have been fine, but it remains a fact that Stormblåst has a great atmosphere, at least in its best moments. It is not bombastic, not pompous or flamboyant - it has a natural charm. With better songs, especially at the end of the album, it would be a real classic. Nevertheless, I recommend giving it a try during a long winter night.

Stian Aarstad is one of the best synthesizer and pianists there was working in symphonic black metal (don’t quite know what he’s doing now, last I heard he was doing keyboards for Enthral). If you ask me (which you are, reading this review and all) Dimmu Borgir really shot themselves in the foot, when they let this man go. Yes, they have sold countless records since, but they just do not have the cool atmosphere than Stian provided with his key skills. And he has a cool look too, I mean who can go past a cane and a swanky top-hat! Aside from those factors, he provided awesome background music for guitarists Shagrath and Silenoz to base their riffs upon.

Shagrath’s voice back in 1996 was not quite developed as it is today ("Puritanical Euphoric Misanthropia"), vocals are actually the only thing that really let this album down. Cool rifts, consistent drumming and bass work, provide a very commendable easel for Stian to paint his harmonic keyboard work upon. Spoken words on this album are honorable and provide more atmosphere for the album. All in all, this is a fine symphonic release in the black sector. Favourite songs are "Broderskapets Ring" which is essentially a spoken song with cool keyboards dominating. There is a lovely instrumental track "Sorgens Kammer" which showcases a bit more of Stian’s piano ability. "Antikrist" is a pretty stock-standard black tune, but about the halfway mark it contains the most exhilarating interplay between guitars, bass, keyboards and drums that I’ve ever had the pleasure of hearing. That alone is worth purchasing this album, that is if you can find it stocked still, I know of a fair few people that have had difficulty in locating "Stormblast".

Bottom Line: If I’ve heard "Stormblast" when it first came out, I would be sure to give a ten, as its innovation was absolutely fantastic... but I didn’t so I can’t. Regardless it’s still awesome symphonic black magic. Pity Dimmu Borgir didn’t stay on this path.