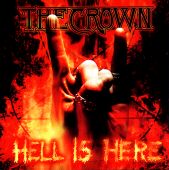 In a country known for it's great metal bands, Sweden's The Crown (formerly Crown of Thorns) is among the best, although they don't get the attention they deserve in the U.S. Hopefully all this will change soon when their new album comes out in April featuring the debut of new vocalist Thomas Lindberg and a full U.S. tour........

"Hell Is Here" is a fusion of many types of metal, played by amazing musicians. The band mixes in amazing speed and black metal-esque vocals and drums, but with a heavy dose of thrash and Gothenburg-style melody.

There is not one bad track on this album, they all rule. If I had to pick out a standout though, it would be 'The Devil And The Darkness' with it's amazing speed and technical brilliance. While most of the albums 11 tracks are furious storms of metal, there are a few slower tracks that provide some much needed rest for your neck! In these slower tracks, The Crown manage really get a great pure metal atmosphere going. That’s one of the best things about these guys, they really can cover multiple styles in one song and make it flow wonderfully, all while just kicking total ass the whole time.

Each member of the band is master of their instrument. Lead guitarist Marcus Sunesson is phenomenal. His blazing solos fit in perfectly with the music. Marko Tervonen is no less impressive as a rhythm guitarist (he also contributes one solo). My first The Crown album was "Deathrace King" and when I put this in and heard Janne Saarenpaa just beating the shit out of his drum kit, I was amazed. His drumming on this is much faster, and he really keeps the music tight, while not using triggers so it doesn't sound like a machine. The only real down point to this album that I can see is the production. It's not bad, but it's not as good as it could be. The vocals are a little high in the mix for my taste. Still, this is a minor imperfection on an amazing album.

Bottom Line: This album rules. It should appeal to many different types of metal fans. In short - these guys go to 11.