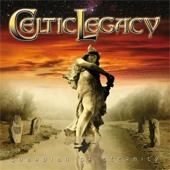 This is a spirited metal effort that has a lot of energy. The songs carry an impact from one track to the next. The album has an undeniable influence of folk melodies, but seems to carry similarities to Power Metal as well. There is a heroic aura to the proceedings that gives the band an authentic approach. They perform melodramatic material that has emotional punch and hits straight to the heart.

The music here sometimes pulls on your heartstrings, but at others it just drags on. This is because the band shares a lot of similarities to the Power Metal genre, though they don’t entirely fit into it. That means the tunes to be found here are at times uplifting, while at others underwhelming. This can be seen from the track 'Afterworld' which is catchy and epic, but gets slightly mired down by a cheesy approach. The performances here are reasonably well done with vocals that have a theatric style and aren’t overly memorable, but somewhat efficient. All in all, there are moments that stick out, but also ones that drag and that makes the album fall a little short of what the band could achieve. There’s enough of a pleasing mindset to generate some attention, but not enough potency and overall impact to really make this an outstanding listen.

Fans of traditional and Power Metal might find something to like here if they don’t go expecting an absolute masterpiece. "Guardian Of Eternity" is regardless a good album that is definitely worth a listen or two. The band put together enough melodic material to provide an enjoyable, if unspectacular listen.