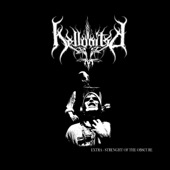 They have been promoting their sonic massacra under different moniker since 1998. I have not listened to their earlier material for that reason I have no referencing points whatsoever and my opinion is strictly based on this short promotional cdr only.
It has become a common standard now that a serious band' recordings are made in a professional manner, and such is the case here.

Very, very atmospheric intro of some Gregorian choir sounding-like performance [actually this piece called 'Miserere' was composed by famous Henryk Gorecki] is abruptly changed only minutes later when all hell breaks loose and the unholy reigns supreme for the rest of the material. At first I was struck with close similarities to works of late Behemoth [charisma], most current Hellborn [groovy catchiness], forgotten Belgian Blasphereion [hellish atmosphere], and maybe middle period Carcass [dual vocals and production]. Wow! You all should already know what I mean. Well, hopefully? That unstoppable drive for releasing high-octane fuelled energy is the name of the game here. No compromise, just brutal display of furious black death assault. Mid paste to high speed range of handling instruments is the standard here that kills.

If you dwell in such described aggression and guitar solos are your likes you cannot go wrong here. It's true Hell United aren't original in what they do, but who knows how will they be when hard work is not stopped right here right now. It caused some goose bumps on my skin so I think it's a good sign that I'm with Hell-united.