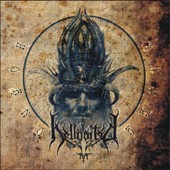 Sometimes I wonder how it works. Does the music find us or do we find music? Well, it probably doesn’t matter. Whichever way it happened, Hell United's Hornokracy has been spinning in my player for quite a while now, giving my ears serious beating every time it's on.

Hornokracy consists of two parts. First part called "ordinarium missae", which is the new 2008 material, and second part - "proprium missae" - is their 2007 material from Extra Strength of the Obscure. Sound wise, both materials are very well played and recorded so there is almost no difference between two of them. If this is your first encounter with Hell United I must warn you! Hornokracy is relentless, massive, unforgiving and furious. Both parts of Hornokracy serve us extremely fast mixture of Black and Death Metal with occasional slower tempo passages that are so crushingly heavy that they could probably grind sand and stone no problem. First, it hits with insanely fast double bass/blast beat drums that made me wonder if drummer is actually human. Then sharp and somewhat out of place guitar that tore me to pieces. Fat bass guitar sound came out rumbling when I least expected it kicking me in the face. Vocals are simply maniacal screams of tormented schizophrenic. Cursing at heavens, invoking spirits, spitting hate. Somewhere in-between diabolic intros add tons of blasphemous feel to the overall hellish atmosphere of the album. Completing the whole package is awesomely done booklet with cover art and layout designed by Ataman Tolovy. His very inspired and original work makes visual side of the project devilishly pleasant. All that combined makes Hell United vicious and unstoppable. It makes Hornokracy a brutal massacre of the senses. No mercy, no prisoners, no bull from the very beginning to the very end. Everything is in its place and all in superb quality.

I can’t really find anything to complain about or find anything that I don’t like about this album. I’ve listened to it many times and I can tell you right know Hornokracy is one of my favorite albums this year. It doesn’t matter if I found it or it found me. Enough said.