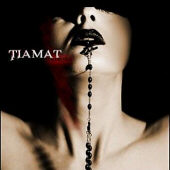 With a string of inferior to mediocre releases -- Skeleton Skeletron, Judas Christ and Prey -- most have come to consider Tiamat a decomposing shell of its former self. Demonstrated by the lack of originality and breadth on their previous three albums, Johan Edlund and his gloomsters seem to have creatively withered faster than a slug in a mound of salt. A long time has passed since the masterful Wildhoney and the brilliantly crafted A Deeper Kind Of Slumber, so please forgive me for the skepticism that precedes 2008’s Amanethes.

The opener, "The Temple of the Crescent Moon,” comes across as hollow and desperate, lacking the confidence and quiet patience that permeated songs from the previously mentioned albums. The melody is generic and sounds almost synthetic. In addition, the lyrics are benign and stale. What might have worked, both musically and lyrically, ten years ago, ends up falling short in 2008.

There is a familiar black metal tinge to the beginning of “Equinox of the Gods,” recalling similarities from Sumerian Cry and Astral Sleep, with rolling, rapid guitar melodies interweaved with penetrating bass thumps and blasting drums. I expected the song to melt into an uninspired doom rock song, ala Prey, but it retained the frenzied pace throughout. “Equinox” ends as a surprising recent Tiamat entry and an above average metal song.

The bleak mood constructed by “Equinox of the Gods” becomes even more sullen for the lackadaisical “Until the Hellhounds Sleep Again.” The track comes across as a failed attempt to recreate the sound that ex-Tiamat member Johnny Hagel mastered on Sundown’s Design 19. Likewise, “Lucienne” is similar in its misguided drudgery. Edlund’s vocals show glimpses of promise, but are ultimately toiled and pitchy. And the would-be fist-pumping guitars? Honestly, Johan? Cheesy metal anthems went out with the Flowbee and Vanilla Ice’s shaved eyebrows.

On the other hand, “Will They Come,” “Summertime is Gone” and “Katarraktis Apo Aima” are stirring and emotive, something that Tiamat hasn’t been able to achieve for the better part of the past ten years. The creeping tempo and atmosphere of all three songs shows that Edlund allowed the music to form, instead of forcing something to happen. The three tracks, sandwiching the sloppy “Lucienne,” establish a somber, yet stunningly beautiful mosaic of atmospheric rock. “Summertime” is a fantastic rock song, mirroring a Paradise Lost-onian tone (Edlund sounds much like Nick Holmes on this track). “Katarraktis” is essentially “Summertime’s” second half, sounding almost identical, but with a more anger-laced component. The former song flows seamlessly into the latter, providing a nice continuity throughout the middle section of Amanethes.

The evil “Raining Dead Angels” is as ferocious and it is strong, detoxifying brilliantly into “Misantropolis.” “Raining Dead Angels” is death metal, black metal and gothic metal all meeting at the pinnacle of each genre’s most valuable asset. The pre-release publicity of Amanethes hinted upon a sound more typical of pre-A Deeper Kind of Slumber Tiamat, and those murmurings hold true on this track (not so much on most of the previous songs, however). Edlund’s vocals are vicious and piercing, the music symphonic and threatening. Quintessential female whispers add another dark element, cementing “Raining” as a standout track. Meanwhile, “Misantropolis” features a more subdued Edlund with his unmistakable voice hovering ominously atop one of the most musically lush and fulfilling songs on the album.

"Amanitis” is an interesting instrumental, seemingly influenced by the Greek surroundings in which the recordings took place. I’m not sure if this track was written prior to the band’s arrival in Greece, but it definitely sounds like it was an improvisation during recording rehearsals. Having said that, “Amanitis” is a nice connecting track, ideally placed on the album.

“Meliae” is an amazingly inspiring song, sounding very much like a modern-day Pink Floyd (not that surprising considering the space rock soundscapes of A Deeper Kind Of Slumber). Edlund’s uncanny vocal similarities to Dave Gilmore are ever-present on this song. Having listened to “Meliae” in excess of ten times before writing this review, I’m inclined to call it Tiamat’s most beautifully written and satisfying song…ever. The accessibility and rock-oriented aspect of the song may turn away some fans, but I’m confident that those not afraid to set aside expectations will find “Meliae” to be a truly pleasing experience.

Unfortunately, “Via Dolorosa” cannot hold under the weight of six of the last seven songs and finds its way to the land of the Amanethes bottom-dwellers, sucking on the radiance of the majority. The penultimate “Circles” is rather lackluster and boring. It does have moments of redemption, but not enough to sustain itself. The album’s closer, “Amanes” is the most tactfully menacing of the fourteen. It’s an effective ending to the album and closes things with slumbered pacing and a somber ambience. Truly dreadful.

As the album comes to a close listen after listen, I become increasingly content and comfortable with being proven wrong. Amanethes, despite its apparent flaws, is an admirable Tiamat release (tracks range from poor to exceptional – if this album lost some of its weaker songs, it could have been a stellar release). The album runs the gamut of atmospheres and emotions that we have come to expect from the band, and with a renewed vehemence and passion. I wish that we could erase two of the previous three albums from Tiamat’s discography, but this ascension from the ashes makes Amanethes that much more memorable and welcomed.