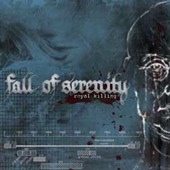 The mark of a good band is that you want to hear everything in the catalogue that particular group has put out after hearing only one of their CD’s. It happens more than you might think, especially in the reviewing business. German thrashers Fall Of Serenity is that band for me at the moment.

I had heard Fall Of Serenity’s 2007 release called "The Crossfire", and found myself impressed as hell. I have now received their previous release called "Royal Killing" to review awhile back which happens(getting things in reverse is par for the course) and I was zealously wanting to hear the album that had led up to one of the albums that I had fell in love with.

The album is not as Death Metal styled as "The Crossfire" was, they were going for more Thrashy with Death Metal leanings, but the music held a great amounts of heaviness that powered the metallic machine. Tracks like ‘Demon (Mon)archy’ and the slowed down chainsaw of ‘Falling Apart’ hold melody in its barbed wire fist as it beats you senseless with its massive crush of guitar and anger charged vocals. These are only two examples of an CD that holds some slabs of great metal on it’s shininess.

You cannot find better metal or a better metal band than Fall Of Serenity. You have some of the most brilliantly executed metallic mayhem that ever had been recorded. They are the finest examples of extreme metal that is out there and the fact that they also have some of the best hooks you will ever encounter, makes them a band that can transcend genres.

Sadly I finish on this bad note, Fall Of Serenity have called it quits in February of 2009 - a woeful day for metal, indeed.