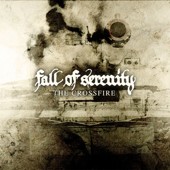 I have to admit, after the first listen to Germany's Fall Of Serenity album, I was not very impressed at all. I had first found it to be rather average and completely mediocre in every category. I then did the normal thing when reviewing albums... I played it again awhile later.

The second playing of the CD that I did, I found that my first impression was pretty much way off the damned mark... to the point of stupidity. I can only think the reasons behind being so far off was that my brain had been abducted by some Heavy Metal hating aliens....thankfully my brains have had somehow escaped from the captivity. ( I think they were aliens that are obsessed with Celine Dion... yikes!) I was completely off the mark on that first play, and I owe FOS a big apology.

They have these amazing melodies which are very catchy, yet have the bite to really pummel people with each and every fire- laden note they produce. Fall Of Serenity leaps out at you with so many of those great hooks while the heaviness creates that balance so many bands are looking for. They are savage and attack you at every turn.

Intensity mixing with power and overall just plainly great... It all adds up to be one hell of a lethal musical combination. They take shades of Death, Thrash Metal and then add in a whole load of gut-burning aggression and fury... and release it all on the world. Fall of Serenity has given us a great album to chew on.