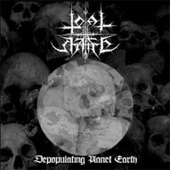 I have read that the population of the African continent is growing by 30 million people each year. In 2050 there will be two billion people in Africa. But wait a moment, four dudes from Bavaria are against it and have a master plan. They simply want to depopulate the Earth. Great idea. To depopulate only Africa would have been an act of racism and everybody with a clear mind would try to stop the crazy Bavarians. But killing the whole mankind is just fair, right?

Either way, don't become confused or even depressed by too much global statistics, try to find comfort with a good black metal album. Too bad that Depopulating Planet Earth cannot help you in this context. Perhaps I am still an absolute beginner when it comes to black metal. However, I cannot express it differently: this album mainly delivers constant noise. I miss almost everything, for instance clear contours, ice-cold melodies, dynamic guitars, thundering drums, charismatic vocals, intelligent tempo changes or breaks and horrifying scenarios. Everything is at best average, but many components do not even reach this level.

The most annoying details are the absence of comprehensible song structures and the absolutely shabby production. You say these two defects go hand in hand? Probably you are right. The drum sound is terrible, and the guitars do not even deliver a minimum of sharpness in view of the muddy mix. But the compositions themselves also reveal immaturity. The songs want to deliver "trve" blackness, but they just rumble down their way without taking the listener with them on their journey. If I forget the dominating hatred for just one moment, the full-length completely lacks emotions. Maybe the opener and the fifth track have a few good moments, but that's definitely not enough to shape a recommendable record. And especially the title track on the fifth position ends in a very strange way. The final solo sounds as if they played their instruments under water. All in all, there are not many sequences where the quartet is creating something good and so their biggest advantage might be that they are not prone to external influences. This wants to be black metal and nothing else.

Be that as it may, one has to endure seven pretty long tracks before the album clocks in at 43 minutes and the prevailing impression is that I have listened to a kind of black metal mishmash. This is a typical debut from the category "We want, but we can't". I know that their third and their fourth album sound much better and I don't want to blame the group for being incapable, but back in 2008, it was not yet time for them to release an album. Thus, I don't speak about a band that lacks integrity, but a band that still had a lot to learn. So now with their better albums in their luggage, Total Hate can re-start their program of depopulation. Hard job. Guess they don't want to know how many - hopefully healthy - African children have seen the light of day while I wrote this review. It took me half an hour, so I think we can welcome roughly 1.700 new African babies. Impressive.