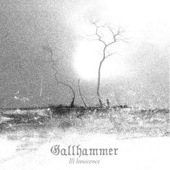 Type:
Release Date: 2007
Label: Peaceville Records
Genre: Black, Doom
1 At The Onset Of The Age Of Despair
2 Speed Of Blood
3 Blind My Eyes
4 Delirium Daydream
5 Ripper In The Gloom
6 Killed By The Queen
7 Song Of Fall
8 World To Be Ashes
9 SLOG
10 Long Scary Dream

This album really did come out of nowhere for me... literally. I never have heard too much Metal from Japan since I had my love affair with Loudness so many years now past. The land of the rising sun has once again made me bow to the east, but this time I also lift my horns high to salute what they have brought me.

Gallhammer are made up of three very pretty Japanese ladies, who happen to be painted up in amazing corpse make up and wearing very tight leather pants. One look at the band pics, and I was instantly intrigued to say the least... then that wonderfully brutal music came rolling out of my speakers. It was then that I was set upon and assaulted by such an intense blast of pure heaviness of music that was led by vocals that were so guttural, yet held such a haunting tone to it as well. These girls don't fool around any, mixing different styles as well as any chef could on the food network, and leaves you hungry for more.

They have combined very odd styled punk feel with eerie - almost dirge oriented doom and slaps in a healthy dose of slow, nearly plodding black metal that does match up with the any bands out there. One listen of these young ladies well crafted and bludgeoning music and you would have to agree... these girls do more than just deliver the goods... let's just say they bash your heads in with it.

I’m sure there are a lot of people out there that enjoy Galhammer’s music, but I’m definitely not one of them. I had to spin “Ill Innocence” few times to get the feeling of what they are trying to do, but could not find anything to keep me interested and I didn’t like most of the music that they’ve created.

Seems that Galhammer likes punk attitude or vibe much more than metal. Their music is saturated with it. The sound, the riffs, the drumming, the whole thing. Only sometimes they try mixing some depressing doom parts and metal riffs into it and add lots of screeching, screaming and somewhat growling vocals but that’s where it all stops. That’s all they offer. All instruments are played in at most average level and could not keep me interested for more than a minute or so. I must admit that there are few parts on the album that had me raise my unibrow, but that’s way not enough to call this more than attempt to play. Most of the “music” on this album is simply repetitious, boring and uninteresting. I know that they are not great musicians (they admit that themselves), but this is the 4th album. Are they still learning? If that album was considered a demo, then I could understand, yeah, they’re new, learning, etc., but what they do here doesn’t deserve to be called an “album”. They are trying to create an atmosphere of hopelessness, hatred and emptiness but all it is is simply desperate attempt to be a band and it’s simply empty and hopeless.

So, like I said at the beginning: I’m sure there are a lot of people out there that enjoy Galhammer’s music, but I’m definitely NOT one of them.