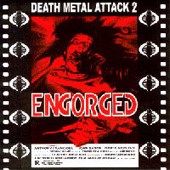 I got to know this grinding death unit through their excellent Where Monsters Dwell album and worked my way back from there. With their second album Engorged being a pretty disappointing affair, I didn't have the highest of hopes for their debut album because of it being a quite cobbled together deal. As it turns out, it isn't that bad if you don't pay too much attention to its flaws.

Despite a muffled production and an over-reliance on movie and cartoon samples, the music is better than I expected. Compared to Where Monsters Dwell this album showcases Engorged at their most embryonic stage. All the elements that made their third offering so great are present here in its most primitive form. As major influences I detect a heavy dose of "Extreme Conditions..." era Brutal Truth crossed with early Napalm Death with touches of Carcass thrown in, placing them neatly among other like-minded bands in this genre like Inhume, Exhumed or Ingrowing. What sets Engorged apart from those others is the fact that they inject some less obvious elements into the mix. Crossover and hardcore influences can be heard throughout and in tracks like 'F.A.N.G.S.' and 'Chemically Castrated' they incorporate the influence of Black Sabbath/Trouble/Saint Vitus which makes for a nice change of pace. As mentioned before, the production isn't all that on the first 11 songs and the sound quality takes another dive from track 12 on. Reason for this is that the Death Metal Attack demo has been tacked on as a bonus and yeah, you can definitely hear that. It has that 90's demo tape quality all over. Stylistically there isn't much of a difference, the band has the same modus operandi as on the first half of the album, with the detail that the demo material is a tad more primitive and unpolished, reminding me of Agathocles more than once. After the demo tracks we get a unnecessary crap sounding live song which I could have done without.

The music on offer isn't bad but it's the shitload of samples and the lesser production values that undermine the effort. What makes this album interesting is the chance to hear where the band came from and how they got to the banger that Where Monsters Dwell is. Musically this is pretty OK, but it's also just that, I'm afraid.