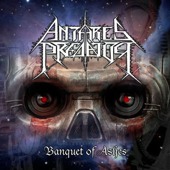 Coming from Norway, Antares Predator’s Banquet of Ashes, an EP Promo that contains only 5 tracks, is a mix of Black Metal, Death Metal, and Thrash Metal. It was recorded in different studios within Norway and Italy, mainly bedrooms and rehearsal rooms, so you can tell that the production isn’t quite up to par, but this really is a good thing considering it was made with many different members throughout the years, but the mastermind behind it all is Oyvind Winther, otherwise known as Warach formerly of Keep of Kalessin.

The best song on this release is the first track, “Erosion of Eternity”. This track seems to be the most recent and the best produced as far as production goes because it doesn’t sound like it was recorded in a bedroom. With that being said, the other tracks, “As Dragons Roam the Sky”, “Sacrament”, “Midnight Wolf”, “Outro”, are still very good. Maybe it’s me, but I like the fact that the production is a little rough because it sounds more sinister and dark. The last track, “Outro”, is an instrumental of a clean guitar, which really sounds good although it could have been longer as it is only a little over two minutes in length.

Overall, I feel that Banquet of Ashes is a preview for what is to come on Antares Predator’s upcoming album, Twilight of the Apocalypse. If this EP demo is any indication of what Twilight of the Apocalypse is going to sound like, then Metal fans are in for a treat once it’s released. I know I can’t wait for it. If you can find Banquet of Ashes it’s well worth buying and checking out for yourself.

Bottom Line: A good preview for what’s to come on their next release.