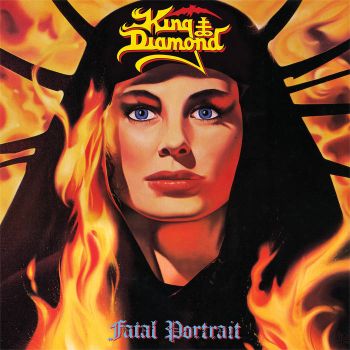 Buy on: Bandcamp
Type: Full-Length
Release Date: February 17th, 1986
Label: Roadrunner Records
Genre: Heavy
1 The Candle
2 The Jonah
3 The Portrait
4 Dressed In White
5 Charon
6 Lurking In The Dark
7 Halloween
8 Voices From The Past
9 Haunted
10 The Lake
MetalBite on YouTube

To start, I don't think King Diamond needs an introduction; many of the reviews previously posted have done so. I will go directly to business; however, I have to address something first: Fatal Portrait is NOT Mercyful Fate's third album as some fanboys like to say. We need to understand that although the frontman of both bands is the same, the personification tends to be also alike and even the voice resembles both acts; Fatal Portrait doesn't intend to be a sequel of Mercyful Fate's previous work. I strongly believe the album stands alone as the beginning of what in my opinion is the groundwork for the most important heavy metal concept albums of the 80s, such as Abigail, Them, and Conspiracy.

King Diamond's over the top vocals are undoubtedly recognizable and that was the driving force as well as the natural transition of Fate's fans to embrace the new project. As I said before, both bands share certain similarities but I think the sound developed in Fatal Portrait demonstrated a more melodic music approach, variety of vocal textures and songwriting, and the first attempt of horror narrative. For instance, 'Haunted' and 'Lurking in the Dark' display plenty of melodies both in King's vocal acrobatics and La Rocque/Denner guitars duo. On the other hand, there are also more straightforward rocker songs like 'Charon' and 'Halloween'. King did not want to live in the shadow of Mercyful Fate and that's something you can tell in the Fatal Portrait song-writing variety. In the version I’m reviewing we can find two bonus tracks; 'No Presents for Christmas' and 'The Lake'. These songs were not included in the original release but I think complement the album well. For example, 'No Presents for Christmas' was issued as a holiday single and shows a humorous side in King´s songwriting skills (something that was not very likely to happen on a Mercyful Fate record). Fatal Portrait takes you on a trip over the seas of energetic music as well as bombastic and melodic tunes that are memorable; full of hooks and sudden changes in the rhythmic section lead by Mikkey Dee and Tim Hansen. The overall sound is loyal to the heavy metal ideals of the 80s without being too cheesy or stereotypical (no hair metal here only straight forward metallic tunes)

Let's get into a brief song by song description of the album. 'The Candle' casts you on a spell with a short intro full of a church like keyboards and the demonic voice introducing us into the horror tale. Then, you hear King's falsetto mixed with the guitar melody and there is no escape; you are trapped into the musical madness. In my opinion, King's vocals are an acquired taste, you love them or hate them but there is no middle point. In my case, I think the vocals fit perfectly with the music's approach and mood, he is a narrator and the different textures included in this recording (highs, over the top highs, lows, evil laughter, etc.) help to get you hooked into the horror tale dynamics. Next, 'The Jonah' also starts with a short intro with some spoken words, similar to the first track but taking a more mid-tempo focus at the beginning to end up changing gear into faster passages. 'The Portrait' is perhaps one of the most melodic driven songs on Fatal Portrait delivering godly guitar riffs and solos that position Andy and Michael as flawless eighties shredders. Then, we have 'Dressed In White' to close side A of the album. This song keeps up with the general melodic/bombastic vibe of the record and demonstrates the unique vocal style that King Diamond possesses. Unfortunately, if I have to say something negative about Fatal Portrait it would be the lack of cohesion between the horror tale and the stand-alone songs. The concept album was still not clear due to the inclusion of stand-alone songs like 'Charon', 'Lurking in the Dark' and 'Halloween'. These songs are great but kind of break up the flow of the horror tale being narrated by the King himself. The fact that there is a gap between 'Dressed In White' and 'Haunted' is a bummer and cuts the narrative in some way. However, the story is mesmerizing and sat the basis for what was coming on Abigail. The five-song cycle, beginning in 'The Candle' and finishing with 'Haunted' tells the story of a haunted portrait (and a haunted candle) and the music dynamics match perfectly with the moods of the story. The album itself is heavily influenced by horror movies and the shock rock work of Alice Cooper. Another argument that detaches Fatal Portrait from the more satanic oriented lyrics in "Melissa" and "Don´t Break the Oath".

All things considered, there is no doubt that this record is one of the foundations for future concept albums not only released by King Diamond but also influential for hundreds of metal bands yet to come. Despite the concept album is not achieved due to the lack of coherence in some parts of the album or maybe the tracklist was not properly organized. Fatal Portrait contains more pros than cons and has aged with dignity through the years, showcasing a top line-up with some war veterans recruited from Mercyful Fate's machinery (Tim Hansen and Michael Denner). Let’s not forget the hell of a show that this band put together when they hit the stage, King's theatricals fit like a glove into the whole horror concept approach distancing themselves from the more straightforward satanic/occult Mercyful Fate style. In the end, Fatal Portrait stands as the first candle in the candelabrum of great albums that the band released during the 80s and part of the 90s.