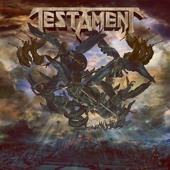 Since hearing their first album called "The Legacy" way back in high school, I have been a major fan of Testament. They still are one of only a few bands who actually plays true Thrash Metal even today. They were one of the originals in the genre, and they still continually deliver the goods. One listen to this album, and that just might be confirmed.

San Francisco based legends Testament have been one of only a few bands that have stayed the course over the years, and kept true to their metal foundation. Now so many years since they started, they still bring the power and passion and the sheer talent that most ‘new’ metal lacks on so many levels. Chuck Billy and company are still one of the true originals in metaldom, and
this album clearly makes that known.

With nine metallic gems to choose from, it is hard to point out one or two to gush about - so I will just say that every one is a new Thrash classic, while having a slight turn to how it is presented so as to have it become fresh and strong. Songs like the explosive 'More Than Meets The Eye' and the thrashing grinding cauldron of speed of 'Killing Season' shows that these men of
Testament are still the one to beat.

Say what you will, weather they might be musically out of date or something like that - I say to that screw the people who think like that! Testament is one of those bands who all others, should respect and look up to. They are one of the original Thrash bands that are left and they deserve to have the respect and admiration for what they have developed.