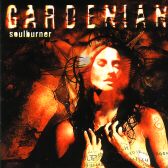 This melodic death metal quartet was formed in Sweden back in 1996. It features Jim Kjell on guitars/vocals, Niclas Engelin on guitars, Thim Blom on drums, and Hakan Skoger on bass. Additional guest musicians were done by Erik Hawk on clean vocals, female vocals by Sabrina Khilstrand and keyboards by Thomas Fredriksson. A strong release by the band and a good follow-up from their debut entitled Two Feet Stand.

Gardenian's distorted guitar tuning was in C, which made the sound really heavy and thick. However, they do utilize clean riffs on "If Tomorrow's Gone" and some acoustic melodies on "Tell the World I'm Sorry." These are just a few examples of songs that were played in this fashion. There were more songs on this release that utilized variations like the tracks that I just mentioned.

The bass guitar was prominent on the song entitled "Powertool” but was just for the introductory riff. The rest of that song was accompanied by those heavy guitars. For most of the tracks on here, they were very catchy and original. The song "Small Electric Space" has clean vocals throughout the entire composition. It begins with keyboards, which segues into heavy guitars, then also has some clean tone measures.

The overall production was really well mixed and engineered. All of the vocal outputs, guitar riffs and drums were totally in sync. The guitars were the most appealing here, as well as the clean vocals by the guest musicians. In terms of the vocal arrangements, these were done by Patrik Jerksten. I would have to say he did a great job utilizing the heavy throat and mixing it with clean one. Both styles were well done and orchestrated. Lyrical themes deal with life, humanity and personal thoughts.

In conclusion, I would have to say that this album was very unique and intriguing to listen to. It's a release that you can play repeatedly and never get sick of. It would be because there's so much variation here. Every instrument and vocal output were in order with one another. The arrangements by the band et al were also very well thought out. An album that every person who values melodic death metal should own. If you're not convinced, then check out the songs that I mentioned already first and foremost.

Being the second release from ex-In Flames tour guitarist Niclas Engelin‘s band, Gardenian couldn’t help but attract attention. At deservedly so, these four young metallers from Sweden know how to play! Containing all the elements that make the Swedish ‘Melodic Death’ scene so well known around the world, "Soulburner" dishes out spoonfuls of excellent guitar riffs, technical drumming and gut wrenching vocals.

Like most bands, with "Soulburner", Gardenian were still perfecting their own sound, adding their own elements to the pre existing genre. But to take nothing away from them, this is a fantastic CD. The guitar lines rock. Every riff is guaranteed to get your head moving ("Soulburner" rates highly on my HBA scale!). From classic layered metal anthems to seriously heavy and generally pretty technical grooves. Before you start panicking... we have some great solo’s here!! The drums are also a stand out. Thim Blom is an excellent and solid drummer. He does some fantastic kick drum work and his patterns and fills are top notch. The bass is also solid as a rock, it sits beautifully with the kick drum and together they form an ultra-tight backbone. Unlike on Gardenian’s brilliant latest release "Sindustries" Kim Kjell opted not to attempt clean vocals and turned to the bands long time friend (and brilliant vocalist) Erik Hawk to take care of these parts. And what a job he does... his classic 80’s style metal voice really works well with Kim‘s deep screaming voice. I think Kim has the... I can only describe it as the ‘thickest’ and most nicely distorted screaming voice in modern metal. His range is unbelievable... from superb low growls to amazingly high screams he can do the lot (and now we know he can sing too!!!). For those of you who don’t know Gardenian, Kim plays guitar as well as sings... and we all know just how hard that is, especially playing this style of music. So big commendations there. The vocal lines are great and the lyrics suit the sentiment perfectly. Also, in the track ‘Powertool’, Gardenian have experimented with some clean female vocals in the chorus with an excellent result. The contrast between Kim’s roar and the soft female vocal part is great. The production is pretty good. Nothing on "Sindustries", but everything is audible, clean and pretty smoothly produced. The only thing I felt it was slightly lacking in was bottom end... but those of you who own "Sindustries" will be well aware that the band has sorted that little glitch out!! All in all this is a great album.

Favourite Track? Without a doubt, the awesome ‘Chaos in Flesh’

Bottom Line: How can I say this... just buy the fucking CD!!