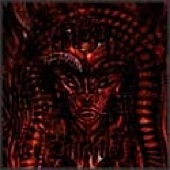 Things can only get better after Acheron's terrible debut. It is always nice to know that one has overcome the lowest point. The band has made a big step forward. This does not automatically mean that Lex Talionis is the name of an indispensable classic of the black/death sub-genre. Far from it! To my great regret, Acheron still make a lot of mistakes that result in an ambivalent overall impression.

First of all, nine intros/outros are included. Fantastic stroke of genius! I guess they were meant to increase the atmosphere of the album but to be honest, these keyboard interludes do not reach the intended purpose. Instead, they hurt the flow of the album and prevent that the listener has the possibility to wallow continuously in the violent sonic orgies of Acheron. Under the bottom line, nine of 45 minutes are useless. 20 percent shit, this is a lot. But the band seems to be entangled in its own questionable concept. I would like to point out that already their first full-length suffered from a very similar arrangement. It is scant comfort to know that this was just one of approximately a million problems of the debut.

Anyway, the regular songs stand in the foreground. Acheron still play a dark form of death metal which is occasionally pepped up with black metal elements. The average velocity is low, the level of primitiveness is still high. Any kind of exceptional or bizarre elements remain out of consideration. However, the main problem is something quite different. Although the compositions reach an acceptable level, they do not capture the attraction of the listeners for more than ten minutes. Roughly speaking, all songs fail to develop a long-lasting impact. The strong verses of "The Entity" constitute the most promising part of the album, but its fairly flaccid chorus is slightly annoying. Nevertheless, this song has an appropriate dose of dynamism, inter alia because of the well accentuated double bass. Too bad that this remains an isolated case. Too many songs are defaced by comparatively lame parts and the compositional skills of the band are still not impressive. Some solos leave a fairly good impression, the sinister vocals are acceptable, but when looking at the big picture, Acheron still lack charisma. Not to mention their stupid lyrics. "The time has come to rid the earth of all its Christian filth"? Okay, I hope you feel well in your clinically clean world of Satan.

Due to whatever reason, the album of the US-Americans was recorded in Vienna. What is even more amazing is the fact that the Austrian production does not show any serious deficiencies. Well, it lacks an extra portion of heaviness in order to reveal the full potential of a slowly creeping piece like "Voices Within", which is actually not bad. But generally speaking, the sound can be described as dense, dark and well balanced. Compared with the dull, powerless and flat production of the debut, the here presented mix marks a noteworthy improvement.

Long story short, the concept sucks, some riffs sound stale and about half of the breaks are not managed in a very clever way. Nevertheless, this second attempt has its moments and the positive tendency cannot be ignored. All maniacs that like old-fashioned black metal can give Lex Talionis a try.