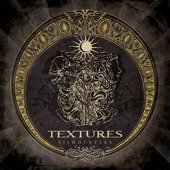 Admittedly, I was a fervent fan of Textures’ second album, Drawing Circles. Therefore, I had unusually high expectations for their third release, Silhouettes. Upon first listen, Silhouettes interested me. Upon second listen, it gripped me. Upon third, it transcended me. Silhouettes is a mature and logical progression, comprised of an eclectic array of thrash metal, death metal, metalcore, prog rock, alt rock and the oft-ignored musical capillaries interconnecting the whole.

Drawing Circles saw Textures beginning to crack the mold in which they found solace and structure, still favoring Meshuggah-esque riffing and vocal styles as an infrastructure, but adding more atmospheric layering and song complexity. Drawing Circles was unique and interesting, albeit still a bit derivative. Silhouettes, however, is a mere thank you note to its predecessors, embodying a “thanks-for-paving-the-way-but-we’ll-take-it-from-here” attitude. Silhouettes torches the map, disassembles the training wheels and leaves the listener disoriented and awe-struck. This album is ambient, progressive, experimental, brutal, mesmerizing, uncompromising, bipolar, and beautiful. It’s thicker than a Detroit smog cloud and shifts directions more rapidly than a Roger Clemens testimony.

The album’s opening track, “Old Days Born Anew,” re-introduces the mathematical riffing previously heard on Drawing Circles, but effectively decompresses into an encompassing blend of thrash and 70s-inspired progressive rock. Eric Kalsbeek’s vocals transition flawlessly from a calculated scolding to an atmospheric Devin Townsend-ish croon, then onto something reminiscent of an Angel Dust era Mike Patton. This track functions as a microcosm for both the album, as a whole, and the chosen musical path of the band. It commences with some familiarity and comfort, but quickly and confidently etches out its own niche, far from the all-to-familiar stagnation of the metal scene.

“The Sun’s Architect”, with its ominous keyboard interludes and sharp, precise guitars, showcases a more technical death metal tapestry. The middle section once again melts into a slower, introspective melody with Kalsbeek’s vocal range as the highlight. Odd-timed and muddy riffs penetrate this track like a spear through the skull, yet there is an element inherently inspiring and calming.

Track placement is another great strength of this album. “Awake,” Silhouettes third track, complements “The Sun’s Architect” effectively and is ideally juxtaposed against rest of the album. It’s seemingly the slowest offering on the record and gives the immediate impression of something more accessible and pop-friendly. But again, one of the most enjoyable aspects of the album is its unpredictability. “Awake” bursts into a frantic display of aggression, technical ability and intensity before fading back into the optimistic lushness that encompassed the start of the track.

“Laments Of An Icarus” and “State Of Disobedience” are prime examples of the technical proficiency of the band. Stef Broks’ percussion is bludgeoning and precise, Jacobs’ and Hennephof’s riffing is both punishing and eloquent and Rietdijk’s keys are effectively interjected and skillfully executed. One of my only complaints on these tracks, and on the album in general, would be the lack of creativity at bass. This is most likely not (bassist) Tielemans’ misstep, but a result of Silhouette’s ambitious trajectory and slight overproduction.

The last three tracks combine to exemplify the schizophrenic nature of the album. Silhouettes is about personal struggle, “light” vs. “dark,” and how there is inherent similarities and conjoining elements in opposites. Textures creates the most adequate musical example of this in “Storm Warning,” “Messengers” and “To Erase A Lifetime.” The middle track is similar to “Awake” in its mood and atmosphere, but eschews the ferocity in lieu of a subdued tone. The ending track is a smorgasbord of layers and textures, and features arguably the most violent bursts on the album, complete with blast beats and guttural growls that would make Chris Barnes smirk. But those moments are contained and we are left with a body of elegant ambience that has come to define Silhouettes and draw a circle around the true greatness of this album.

Silhouettes is psychological, physical, mathematical, untamable and schizophrenic. It’s Freud on the couch, Stephen Hawking in a parachute, Pascal on ecstasy, Knievel without restraint and Jeckyll and Hyde with instability issues. It’s a paradox and reinvents modern metal. Textures is one of the most talented, creative and constantly evolving bands currently in the metal scene, and Silhouettes is undoubtedly one of the best releases of the year. I eagerly await their next move.