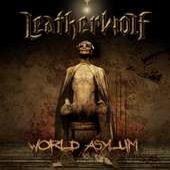 Hailing from Huntington Beach, California, Leatherwolf is a band that has been around for quite a while, since the mid-1980’s in fact, so it’s no surprise that they know what they are doing and what they want to accomplish when one listens to their latest album, New World Asylum. Mike Olivieri returns as lead vocalist to complete the original line-up for this latest installment along with existing members Geoff Gayer and Carey Howe on guitars, Paul Carmen on bass, and Dean Roberts on drums.

When first listening to New World Asylum I get a since of familiarity, like I’ve heard something like this before, then it dawns on me. It seems so familiar because Olivieri’s vocals sound somewhat a little like Dave Mustaine’s of Megadeth, especially in the song, “Behind the Gun”, but with a cleaner, more controlled sound. With that being said, I don’t see how anyone could get tired of hearing Olivieri deliver the lyrics on this release. It’s very rare to find a singer now days that actually has talent, but Olivieri definitely showcases his talent on New World Asylum.

“Kind of the Ward” is probably the most solid song on New World Asylum. With lyrics like, “No soul, don’t try to save me, I’m way beyond repair”, you get the feeling as if you are sitting there, in a ward haunted by what Olivieri is trying to tell you. This song also showcases a perfect example of flawless guitars almost like that of Iron Maiden. Dare I say Leatherwolf is just as good, if not better than Iron Maiden? Yes, I do believe this after hearing New World Asylum in its entirety. Some other notable tracks are “I Am the Law”, “Behind the Gun”, “Dr. Wicked (Rx O.D.)”, and “Derailed”. One downfall this album has is not being long enough. After each song I was hoping for and needing more.