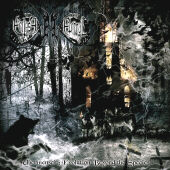 ::   ::
Type:
Release Date: 2008
Label: Independent
Genre: Black
1 Nihilistic Contempt For Optimism
2 The Dragon Has Come To Blot Out The Stars
3 Evolution Beyond The Species
4 Übermensch
5 A Knife To The Throat Of Life
6 Seven Billion Dead And Hung
7 Into Black Abyss
8 The Approaching Storm

Canadian Black Metal has come out and now begins to kick your testicles up though your skull and out of your pathetic body while darkening your very soul. Yep, these are very strong words I have decided to use here, but more than befitting. Eclipse Eternal truly is a Black Metal juggernaut.

Hailing out of Canada's largest metropolis, Eclipse Eternal come up from the sludge of the metal underground... and staked their pentagram tinged maple leaf for the world to see. Mixing great melodies that are hellish in their intent along with the sheer and unabashed brutality of a nuclear winter... Eclipse Eternal clearly slams you in the face, and draws blood with each blow.

Deep and low guttural vocals seem to call forth from the brimstone pit of pain spewing for it's message of a bleakness that mankind seems not to want to acknowledge. Through the spouting of evil, the music itself adds in with a symphony of darkness that deliciously blend everything together in a melting pot that is intended to please even the most jaded of Dark Metaller. This is a pretty impressive outing, for a band that is still looking for a bigger label to back them.

The only drawback to Eclipse Eternal release was the production at various times throughout the disk... as they seem to losing the vocals a little once in a while in the mix. Despite that, it still was clearly a pretty well thought out and put together album in the long run.

There it is in an nutshell my legions of Metal brothers and sisters... that is the power that the band has to offer. Pretty damn impressive, if you ask me. Give them a listen and just know that Canadian Black Metal is strong and we are dedicated to every note we make. What else would us Canucks be doing, when for five months out of the year it is minus twenty outside. We make music.