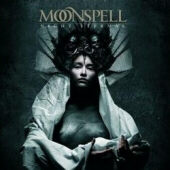 Generally speaking, Moonspell's approach does not really fit my musical taste. Too much Depeche Mode, too much eroticism, too much sentimentalism. The here reviewed album is not free from this saccharine poison, too. "Scorpion Flower", for example, is a smorgasbord of cruelties. Wailing female choirs meet oh so momentous lines and only unteachable masochists or convinced romanticists are able to enjoy the clear vocals of Fernando Ribeiro. (As a footnote, it is up to you to decide whether or not "unteachable masochists" and "convinced romanticists" are synonyms for each other.) Yet due to their undeniable potential, Moonspell deliver very strong tracks as well.

The title track does not only possess a dramatic and stirring chorus with a fantastic melody line. It also holds double bass sections, demonic lead vocals and a fine degree of pressure and vehemence. Of course, the song does not show a totally aggressive configuration, but its atmospheric density and the adequate number of heavy elements form a great track which represents the harsher side of Moonspell very well. One can discuss whether the pretty polished production is helpful for this kind of songs. But even the partially brutal "Shadow Sun" does not suffer from the mix. Quite the opposite, its overflowing chorus creates an enormous intensity and the guitar lines do not lack clarity, violence and determination. And, by the way, this piece proves once again that Fernando is blessed with an overdose of charisma - although I mostly hate his clear vocals. Given this situation, it is doubtlessly true that Moonspell have a talent to pen songs that deliver profound emotions and they also recognize an effective riff whenever they meet one. The swift and powerful "Moon in Mercury", which boasts with a perfect flow, can tell you a thing or two about it.

Some tracks that are neither outstanding nor shitty have found a place on Night Eternal as well. "Hers Is the Twilight", for instance, does no harm while passing by without leaving any kind of aroma. Yet the great picture shows a more than only sufficient hit rate. Even the melancholic and dignified "Dreamless (Lucifer and Lilith)", a piece without edges and corners, adds value to Night Eternal. Yet it is out of question that more powerful songs like the following "Spring of Rage" are the icing on the cake.

Summing up one can say that the album is not free from the typical Moonspell elements which I mentioned at the beginning, but they stand in the shadow of the metallic components of the band's art. Thus, if you are able to bear a rather small amount of gothic kitsch, Night Eternal will predominantly convince you in view of the technical and the compositional skills of an experienced and professional formation. And maybe the guys even liberate themselves from their moronic Depeche Mode influence. My belief in man's inherent goodness cannot be broken.

Pulling out strong with their gothic oriented metal release Night Eternal, combining mostly heavy guitar sounds, aggressive drumming, vampire laden vocals, intense drumming and aura filled atmospheric synthesizers to augment the musical finesse. I liked this album from start to finish. To me the guitar, vocals and drumming brought more into this then the synthesizers, but they made the mood of this album dark totally. One helluva good release, intense and original. The guitar melodies are what captivated me the most. A lot of experimentation in the sounds of the album to get its' essence more than just another gothic metal output. They dug deep in creativity here. Way deeply composed!

The album's heaviness has to lie in the guitar riffs and drumming, plus the vocals are also very harsh as well as intensified. Not every song was just sounding the same, but its' brutality is featured throughout. Guitars are doing a series of things here, tremolo picking galore, some clean tone melodies, bar chords and some lead guitar, just a limited amount. They focus more on the rhythms, but I'm not saying the leads are entirely absent or non-existent because that would be an untrue statement. What their overall concept in this sort of musical change compared to past releases is the implementation of the synthesizers and a more melodic sounding gothic album, not just plain brutality.

As you get from track to track, you'll find different tempos, some tint of clean vocals/guitar, but in an overall sense the release is really dark and demented. The vocals range, but mostly are intense throat, screaming away. A total musical onslaught here musically, lyrically and atmospherically. It's a really likeable release because it's balls out brutality a lot of the time, but it ranges though as the speed of the album is moderate. The guitars are thick and heavy, the drumming pounding through your skull and vocals just deafening. There's more clean guitar/vocals as the album progresses. The synthesizers make it so grim, but they didn't abandon their roots in metal, they went diversifying.

What's unique even more so is the fact that they have some chorus parts that are so emotionally felt, with guest backup female voice and even more so riffs that are so creative. When hearing this album, don't overlook the fact that they change things up and aren't tackling just one genre, they're tackling gothic, heavy and death oriented metal, though gothic is prominent on here. It's a blend, I think that they wanted a change from what they originally started out doing nor by any means wanting to sell-out by changing a bit. They want a different array of sound to their music and I think that they covered all avenues on here. You get so many influences on this release it's incredible.

Still think that it's just average as I write this? No, this album is NOT an average rating. It's way higher because the music is what's so notorious on here and guitar that's so admirable. They did an outstanding job in the production quality picking the right engineer to get this one mixed way awesome featuring every instrument/sound/vocal parts to be well heard and entirely admirable. A sheer dominance in the gothic metal community and I think a highly underrated album to say the least. Nothing boring or stale about this one. They attract it all on here, sounds like those never heard before by this band and a concept of just more than a simple gothic release, a musical gem in metal.