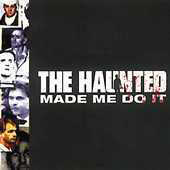 After their angry debut, The Haunted returned quickly with their second full-length. The band was obviously in a creative flow and therefore Made Me Do It stands pretty close to their output from 1998. The first 90 seconds of the material, the intro "Dark Intentions", makes two things immediately clear. The Haunted still have an affinity for Slayer-esque riffing and the production opens the door to anger, hate and fury once again. It is no surprise that the first regular song, "Bury the Dead", possesses this straightforward approach of typical thrash openers. It provides the listener with a short infusion of high velocity, no more, no less. Even though the next track brings with it the first tempo breakdown, it is out of question that The Haunted like to score with harshness, violence and negativity. This does not exclude less vehement tracks like "Leech". But the basic atmosphere is full of darkness, depression and discomfort, no matter how massive and fast the songs are.

"Bury the Dead" opens the full-length for good reasons, because it is brilliantly designed, and it met the expectations of those who had bought the debut very well. It is definitely great that more songs point in the direction of the first regular tune. The speedy closer completes the circle and further eruptions lie between these poles. "Revelation", almost as brief as the intro, celebrates a musical orgy of blood and stands shoulder to shoulder with the opener, but songs like "Human Debris" with its driving main riff also do not have to hide away. Not to mention the precise sharpness of the rapid "Silencer". The restlessly fighting guitars give the material a very lively element and the hateful vocals of the then new lead vocalist add the brutal touch. Freaks with a penchant for punk will probably also like this kind of songs, because they are more or less reduced to the essentials and avoid unnecessary complexity without being predictable or boring. Nevertheless, metal prevails.

Despite all its strengths, the output is not completely free from defects. "Hollow Ground" fails to deliver exciting guitars and the robotic vocals during the comparatively soft chorus appear strange. Was this their first kowtow to the greedy industry? I would not go that far, but it is a weak number, with or without commercial motivation. The band also tries to break the chains of its genre with the melodic chorus of "Under the Surface", and this experiment does not fully convince. Two little compositional flops, but the technical skills of the dudes are beyond doubt. Their accurate thrashing shows the dexterity and agility of the musicians. Okay, nobody expected anything else in view of their origin (Sweden) and their creative past (inter alia At the Gates). Nevertheless, it should be mentioned, because precision is a key success factor for a great thrash album. And Made Me Do It, no doubt about it, is such an album. In my humble opinion, it is even slightly better than their debut.