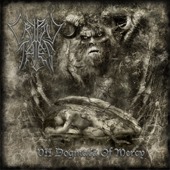 I love the works of Stephen King for most of my reading life. Perhaps the reason why, is that he is the literary equivalent of Death/Doom/Black Metal. For me, that is not even a stretch to imagine.... a good story that scares the living shit out of you is amazement in my books. Ready for a scare? Cryptic Tales is the one for you, and this band is even more scarier than any of Mr.King’s writings.

Black Metal is all about telling a tale of deepened darkness, abomination of the soul, pain, and of Satan... and not in that order. In the world of powerful Black Metal today I am thinking that Poland’s Satanic sons Cryptic Tales are of the best of the newer bands out there. They have taken insight and lessons from previous band and then make it all of their own.

Atmospheric, powerful and unquestionably darkly powered Cryptic Tales abhorrent tales let the masses hear Satan’s messages in all of his hate-fuelled glory. Songs like ‘Purgatory’ and ‘Set The Unholy Icons Free’ say exactly that -and much more as every malevolent word speaks the darkest of truths. It is raw, unrelenting and completely sadistically evil.. where the words send you to the places that archangels fear the most.

The band is great, and the raw production helps their brand of Black Metal to achieve this evil of vibes with delicious depravity. Cryptic Tales must be heard to be enjoyed. It’s fun to be scared... and this is some serious fun.

Black Metal... pure, unadulterated, 2nd generation Symphonic Black Metal. This is not to say this disc is inherently bad. In fact, to the contrary, this disc is well produced, coherent, tight, and would be a prime example of the stereotypes cemented by Dimmu Borgir and Borknagar circa 1996-2000. This might be why I am having such a hard time with this album. One can grade Black Metal based entirely on generation and time, however it does seem that around 2000 was where Black Metal finally nailed the coffin shut on this particular style - and for good reason too. But we will leave that for some other debate.

The vocals are the requisite slime throated scrape, note the Dimmu Borgir - "Spiritual Black Dimensions" movement on the guitars and fluid synth strings, drums with credible Nick Barker-esque bashes (though considerably less triggered sounding than any of his stuff), and bass that presents clear and tight like it should - you get an idea of exactly what is presented. There is a little disappointment in the keyboardist's use of patches, besides the strings (which are quite full); all other patches are weak from the piano to the silly harpsichord. The vocals also present with very little variation, where they probably could have carried with a little more genuine flare. Bottom line - if you are going to play Black Metal cultivated from this time period (and a decade late at that) you better do a damn phenominal job or you are going to get lost in the shuffle.

As previously stated this disc is not bad, it's just dated. Cryptic Tales could be contenders, if we had a time machine and could jettison this album with the band back to 1997. It's a shame to say that too, as I can tell they are truly feeling what they are doing. This is what they want, it's just nothing new, nor very inventive.

The package art itself is well thought out, rendered grayscale with a figure appearing from the background that looks in fact a little like Hellboy with Swampthing's skin leering at a stone angel below. This is very representative of the work contained within. Given that, the wardrobe has got to go. The band drape themselves in all manner of gothic crap on the back cover with expressions I hope are flooded with sarcasm, because... it's just goofy. The inner booklet photo is equally mismatched, like Saxon meets Cradle Of Filth. The rest of the cd art is very appropriate, but that does nothing to help the misfortune of the band photos.

Overall - props for effort, but your boat left the dock a decade ago.