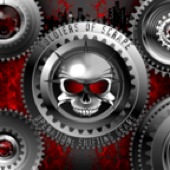 The sadly now defunct Pantera has been charged with keeping metal alive during the sad dark days when Grunge was thought to be good music( Nah!). Now in 2009... Soldiers Of Scrape are holding the flag of metal high and proudly, and showing that the true flame of metal is alive and now has become a flamethrower to waste the naysayers in their way.

Heavy as a avalanche, complex as any band out there and completely unyielding to the twentieth power... SOS are the true holders of the metal crown. Taking the lessons from such metal legends as Black Sabbath, Overkill and the mighty Slayer... they make music that soothes the angst of any metallic souls, while scaring the living hell out of everyone else who does not have such a soul.

Songs like ‘Cold Beer!’ remind us of great times, while the well written homage to Slayer ‘KFKL’ gives the undisputed Speed kings the highest level of respect for which they have deserved for years and SOS have given... and only a band as good as this could pull that off. Each song is catchy, memorable yet packs enough destructive power that can be measured in nuclear megatons of force.

Follow the Metal Corps in their mission of succeeding in world domination... Soldiers Of Scrape are real because they alone really do speak for metalheads everywhere. My last question before finishing should be on the lips of every proud headbanger throughout the world.

My only question would be: Where do I enlist?

The latest release from Soldiers of Scrape, Operation: Shifting Gears, has just about everything that a Metal fan could want. When first listening to the first song, “Blaster”, I was very impressed with the beats and vocals. In fact, I had to look at the picture of the line-up and look for Phil Anselmo, former front man of a band called Pantera. I did not find Anselmo in the line-up anywhere, but I did see Mick on vocals, Face on guitar, Wayne on bass, and drummer Andi. Soldiers of Scrape sound a lot like Pantera, but that’s not a bad thing. The chemistry of these people together speaks volumes in their music and you can tell as each song is just as good as the last.

One particular song, “Old School Metal”, deserves a rating of a 10 in itself because it’s a song that both Metal fans and bands can both relate to. Just as the song says, I’m sure many Metal fans remember coming home from school and listening to Black Sabbath, or even at least one of the other bands they mention in the song. As the song goes on, a verse is dedicated to the Metal “brothers” who have died before they should have like Jimi Hendrix, Jim Morrison, and Dimebag Darrell among others. I think once people hear “Old School Metal” they will agree that the song speaks for many Metal fans.

Some other songs to check out are “Blaster”, “KFKR”, “Cold Beer”, and “WET”. “Cold Beer” almost seems like a novelty song about none other than, what else, alcohol. Some novelty songs that certain bands release just suck, but “Cold Beer” is so aggressive that it punches you in throat and leaves you gasping for air and wanting more, so it works well and fits with the aggressive style of Soldiers of Scrape.

Overall, if you like Pantera, you will definitely like Operation: Shifting Gears. I could see a couple of songs on this release catch the attention of the public and find their way onto mainstream radio stations. This is one album that you will keep in your CD player for a while.

Bottom Line: All Metal fans should have this album in their music collection.