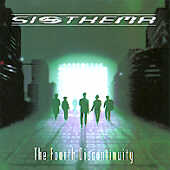 Type: Full-Length
Release Date: 2001
Label: Noise Records
Genre: Thrash
1 Distorthica
2 Cy.Tech Eye
3 When Everything Turns To None
4 Voodoo Machine I
5 Hydro
6 The X-stasy And The Eclipse Of The Flesh
7 Reflector
8 Human Leech
9 The Sequel
10 Chrome

While listening to the first couple of songs, I was pretty happy that I’d received this disc to review; there was originality and muscle in the music which are two of my major criteria points for a solid metal album.

However, by the time I reached The x-stasy and the Eclipse of the Flesh, I felt really… tired. Tough and angry cyber-thrash it may be, but the repetitiveness involved got me yawning. Sisthema seems to use the same jagged offbeat rhythm techniques on every freaking song. You eventually get to the point that you’re not sure if you’re listening to the next song or the one before what you were just listening to. If it was Sisthema’s intention to confuse me with a bunch of songs disguised as each other, they did a damn good job.

Another problem here is that Sisthema gives you the illusion that they are breaking new ground, but it is only a brief illusion before you see through the rhythmic façade. We’ve seen all this before dating back to the late eighties with bands like D.R.I. and Ministry: thrash and industrial sounds on a different beat. The difference between those bands and Sisthema is that they were original, whereas Sisthema is more of a chaotic imitator’s mask of cybernetic proportions.

For some, immitation can be a good thing. To me, I did not see it work out so well for The Fourth Discontinuity.

Bottom Line: Cyber-thrash that manages to find a great deal of repetitiveness in its chaos. This disc will likely be a good friend to the skater scene.