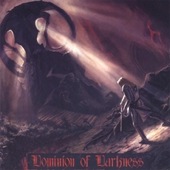 I have to say, this band has impressed me, and has totally reaffirmed my faith in true metal. I have ignored this band in the past... never once actually listening to them. I attribute that to perhaps losing ten IQ points somewhere... but I seemed to have located them now.

After changing their names from Iron Angel (not the Speed-metal band of the mid-80's), they then shot out two albums on Metal Blade Records (self-titled released in 2000 and "Theatre of War" in 2001) and had a highly successful tour of Europe with Armoured Saint. Sadly, line up changes and then the loss of their label forced them go into a state of limbo for a time. They now emerge ready for the comeback.

I can hear shadings of Iron Maiden abilities melding with Judas Priest power sensibility and there were even some sped up Candlemass type of riffs were thrown in there for good measures. Vocally, I also was surprised to hear their new Frontman, Chaz Bond (taking over for David Taylor) and his Geoff Tate (Queensryche) inspired vocals. He did not simply imitate Mr. Tate in any way... he actually amped it up more than a few notches.

Mixing all of their obvious influences into one very power filled disk, Jacobs Dream also inject a whole lot of originality into it and brings it all together into a CD that screams to be noticed. They take the best, and makes it all their own that is deep in heaviness while shows both complexities and simpleness as well that has been overlooked in the metal world by everyone except for die-hard fans.

Tracks like 'Demon’s World', 'Hero' and the amazingly punishing instrumental 'Hands of Doom' show that these metal heads don’t need to be ‘extreme’ metal or have gravel vocals from the pits of hell to jump into the metal pool.... they just have to be so damned good. Jacobs Dream has layed out a album worth shouting about... and that is what I am going to do! With that said, Jacobs Dream puts forth a album that must be listened to... LOUDLY!!