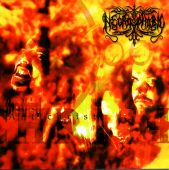 Type: Full-Length
Release Date: October 25th, 1999
Label: Black Mark Production
Genre: Black, Death
1 Rise Of The Infernal
2 The Third Of Arrivals
3 Frozen Empire
4 Into Armageddon
5 Eye Of The Storm
6 The Unhallowed
7 Isaz
8 The Throne Of Souls Possessed
9 He Who Rideth In Rage
10 Demonic
11 One Last Step Into The Great Mist
MetalBite on YouTube

I guess we all know that some statements are simply true. Sweden is a fascinating country. Loudmouth Zlatan Ibrahimovic has scored the goal of the century against England. In sharp contrast to their compatriots of In Flames, Necrophobic have never released a bad album.

The Third Antichrist is made for those who enjoy mature death / black metal. Necrophobic's trademark, the combination of profound musicality and sinister brutality, builds the fundament of all songs. From my point of view, the black metal elements prevail. Or to express it differently, typical death metal modules are conspicuous by their absence. Tobias Sidegård does not growl in the most incomprehensible way and the guitars are not focused on the deepest tones. Of course, this does not mean that Sidegård sounds like a prima donna. His vigorous voice delivers an admirable dose of vileness. Additionally, the guitars also do not lack of penetrating power. The organic, powerful mix presents the guitars almost optimally. Sharpness and vehemence are well balanced. In a nutshell, the sound has everything that it needs to draw the black metal hordes on its side. The Third Antichrist provides a sinister and dense experience without presenting overly insane sequences. Death / black metal lunatics from South American should take this work with a grain of salt.

But even if one does not originate from Colombia or Brazil, the output does not border on perfection. It holds good songs without exception, but I miss two or three absolute highlights. There can be no doubt that the mid-paced "Into Armageddon" scores with its flattening guitar work. It is also out of question that "Eye of the Storm" grows malignantly. Its high-speed parts, the rather steadfast verses and the dark melodies of the chorus form a strong unit. "The Unhallowed" is a rapid eruption which sends its deadly arrows from the gateways to hell. Indeed, these three examples may give you an idea that Necrophobic do not disappoint the supporters of the very dark arts. Yet the last iota of brilliance is missing. Anyway, The Third Antichrist works as a whole and you will not be tempted to press the skip button. The album has more substance than its good yet slightly skinny predecessor and its omnipresent atmosphere of unholy darkness is probably its greatest advantage.

In view of the homogeneous song material, one cannot say that the album is filled to the brim with surprising twists and turns. Yet each and every song holds an adequate number of breaks and tempo changes. The musicians are definitely not interested in primitiveness and any form of sloppiness. Instead, they have a knack for the right mix of fairly melodic sections and misanthropic outbursts. This cocktail tastes well and its aroma holds on until some very rapid guitars shape the beginning of "Demonic", the last regular songs. This tune summarizes the strengths of the band for the final time. A worthy ending, if we forget the overlong outro for a moment. So, let's come to the end. All in all, this album is free from major flaws and Necrophobic's potential can only be denied by ignorant fools (aka diehard In Flames fans). Nevertheless, model students are condemned to deliver outstanding results. I definitely recommend this album, but it is rather (very) strong than absolutely outstanding, at least in comparison with Zlatan's goal against England.