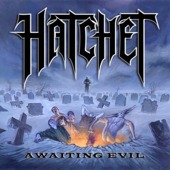 It’s apparent within the first 20 seconds of the opening track that Awaiting Evil is an anachronism: raw, ferocious, minimally produced thrash metal from the Bay area in 2008? That’s the equivalent of running down the street listening to an iPod and being hit by a DeLorean. It’s just plain rare.

Once the acoustic intro, Darkening Skies, drifts into the sunset over San Francisco Bay, Frailty Of The Flesh cracks the foundation open like a quake ripping through the streets. The song is immediately reminiscent of Kill ‘Em All-era Metallica, mixed with some Slayer and Exodus. In fact, reach your hand into the proverbial grab-bag of 80’s era thrash and you would pull out some applicable influences.

Sealed Fate is another no-frills slab of thrash. The guitar riffs pummel and spurts of schizophrenic lead melodies overlay this pile of smoking metal. The vocals are primordial and appropriately raw. Frozen Hell, despite its horrific title, is a track that makes the undisputed case that Hatchet is for real, not just a cover band-turned original act. Frozen Hell churns like acid-laced bile and captivates throughout its 4:24 running length. In an era where metal is increasingly progressive and epic, Hatchet demonstrates that less can be more, and simplicity is the new complex.

The fifth and sixth cuts, Attack Imminent and The Morlocks Tomb, are both slightly more intense than the previous tracks, reminding me more of Slayer’s Hell Awaits than Metallica or Exodus. On both tracks, the tempo has been injected with a stimulant and the riffing is more aggressive. On Attack Imminent, there is a sense of chaotic urgency, which makes the song quite cacophonous. I obviously want to give Hatchet credit for being their own band in a time when such music is mostly absent, but the downside to re-creating a successful era is to constantly compare. But such comparison is more complimentary than anything.

Storm The Gates begins with a riff that comes across as a bit recycled. While I appreciate the continued effort of re-energizing a genre that has been widely laid to rest, this track misses the mark. There are a few sporadic highlights within the song, but the track fails, as a whole.

The eighth song, The Dead Will March, sounds eerily like a B-side from Slayer’s Seasons In The Abyss. There is a paranoid feeling throughout the track, which adds a darkened layer. The guitars are ferocious and constantly evolve from riff to riff without hesitation. Again, the vocals are spewed venomously, with no regard for melody or harmony.

The album ends with the title track, Awaiting Evil. In true thrash form, the title track captures the epic glory. Awaiting Evil is…well, evil. Hatchet holds nothing back on this ending track. Marcus Kirchen’s vocals mirror everything from King Diamond to a young Tom Araya. The guitars are absolutely punishing. Period.

Hatchet’s Awaiting Evil is a welcome exception to the typical new millennium’s selection of metal. While there is clearly a lot of amazing metal being released in 2008, it’s fun to watch the genre come full circle. What was inspired and built upon in the late 80s has found its way back to the place of its birth. Awaiting Evil is concise, angry and simple. It’s metal the way metal was when rock gave birth to it and named it.