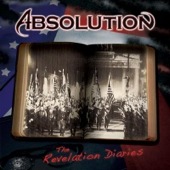 Thundering out from just outside of Los Angeles, Cal., this five piece band called Absolution slaps you with pure bombastic metal which reaches out and grabs you by the short hairs and proceeds to yank them out by the roots without any mercy what-so-ever. This twelve song demo that has been laid on the world is plainly pure and honest Metal at its finest.

Absolution’s The Revelation Diaries is an album so aptly named, and shows what ‘revelations’ means. The band have moulded and crafted their love of metal into a new hybrid sound that is so wickedly ferocious, yet spotlights every ounce of talent they bring along for the ride. It does have a obvious 80's sort of sound, yet it is so much more. What they have created is a spawned creation that it far beyond the original ‘thrash’ tag. Songs like ‘Bleeding Victory’ and ‘Seven Deadly Sins’ drive home the point that this band can write songs that are both incredibly intelligent and deadly blunt as well. Brains and power... a very potent combination.

With that much explosiveness in the music, it made my mind instantly drift back to the heyday of the mid to late 80's thrash scene. I can hear clear influences from many bands of the thrash scene past. Smatterings of early MEGADETH mixing perfectly with some Canadian old school thrashers SACRIFICE are among what they have built on...but they combine them all perfectly and added to it to fashion their own brand of Metal.

Absolution will make you believe in real and bluntly honest metal again. One listen will tell you that. They have brought the old school thrash into the new millennium and made it meaner, nastier and more relevant than ever... without making it seem hokey or fake. Purely the art of thrash is alive... and kicking ass.