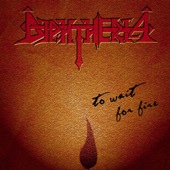 Relaxing with this CD playing, I am automatically hit with a question right off the start of song one... am I back somewhere in 1988?? It seemed that I was, at least in my head, I have been transported to a time when metal was simply metal.. And was oh, so good! I open my eyes, and found that it was true!

Home base for this band is the island of Cyprus in the Mediterranean... and perhaps I am now starting to believe that this is where true metal has been hiding out all of these years. Forget pigeon hole type tags such as ‘Black Metal’, ‘Death Metal’ and every other name that is flying out there... Diphtheria brings back the idea of simple, straight ahead old school metal with great zeal and energy without ever letting the music become stale or out of place. Shades of classic Iron Maiden, Omen and all the rest of the eighties metal fare (Both known and unknown) come forth and makes the metal world that much more proud.

The band is not cutting edge axe-shredders blistering away at 100mph nor are they a band that is trying to invoke Satan and his henchmen to rise up and take over our little bluish- green home... Diphtheria simply and humbly pays a respected tribute to all of the music that made them want to play in the first place, while being able to put their own stamp of originality on it.

To Wait for Fire won’t win awards or be held as some sort of a benchmark for the new crop of Metalheads, but the bands honest simplicity, catchy melodies and the amazing passions they have... all lovers of Metal can not only relate to, but respect in a way that brings us all as one united together under the banner of Metal.