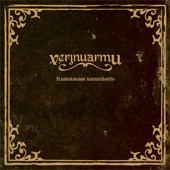 Melodic Death/Black Metal mixed with a warped twist of Folk music is exactly what Verjnuarmu delivers with such crushing force. If this was not eye opening already, they also seem to be an eclectic collection of originals all on their own... which is not a bad thing.

This Finnish band (the translation of the band's name means 'Bloodscratch') seems to have a originality complex, as they call their own brand of metal 'Salvo' Metal, in tribute of their Finnish dialect they sing in. Unlike most of the bands in their country who write metal mainly in English, Verjnuarmu simply just do it their way and never once shies away from it. That stand they took alone, puts them head and shoulders over most bands out there.

I do not speak this language, but I have to say it does sound pretty good the way they did it. The sound of the language goes well with the completely deranged heavy music they have dreamed up. I love just how good it sounds to me, making me take great notice of the heaviness and complexity that they do it with. It really did keep me interested through out the entire playing time the CD was on.

It is hard to listen to something that is not in your language, but I think it is also a good thing. You have to rely on the international language of music to make up for it. Verjnuarmu does bridge the gap... you may not understand if they are being sarcastic or anything of the sort in their music... but you can still appreciate the brutal nature of their music.

This sort of basic honesty does speak to every headbanger all over the world, even when the words cannot be understood. Metal music alone, is world-lingual. It is the music of all of our souls...Horns up!

Musicianship: 8.5
Atmosphere: 9
Production: 8
Originality: 10 (for the utmost respect of them using their own language)
Overall: 8.5