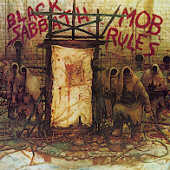 Type: Full-Length
Release Date: October 1st, 1981
Label: Warner Bros. Records
Genre: Doom, Heavy
1 Turn Up The Night
2 Voodoo
3 The Sign Of The Southern Cross
4 E5150
5 The Mob Rules
6 Country Girl
7 Slipping Away
8 Falling Off The Edge Of The World
9 Over And Over
MetalBite on YouTube

With Dio coming in to replace Ozzy, the band would undergo what would be perceived as a renaissance in their career, a brief moment of revitalized energy to carry them into the next decade and keep them staying relevant at the very beginning of the decade. One look at the cover art and one would assume that the band have gone back to their roots, but instead comfortably stick to the formula that worked so well for the last album, and because of that, Mob Rules is generally not as well received for its play-it-safe approach. You've got your mid-paced blues rock tracks a la "Lady Evil", with "Turn up the Night" mirroring "Neon Knights" and "Falling off the Edge of the World" echoing "Die Young". Not to mention the more emotive, melodic cool off song at the very end of the album. Yes, I think Mob Rules gets this attention rightly so, it really is living in its brother's shadow. There do exist differences between the two records; however, in that this album is just weaker in almost every conceivable way.

For as great as it was to replace Ozzy with Dio, the same can't be said for trading Bill Ward with Vinny Appice. It's here that they take a huge hit and it really shows when you listen to the epic "Sign of the Southern Cross" which stretches on way too long and doesn't have much reason to be as long as it is. It plods along slowly and atmospherically and wishes it could be "Stargazer". With all of the breathing room this song gives, you'd think Appice would do something other than just the bare minimum. "Country Girl" similarly wishes it could be "Gypsy" by Uriah Heep, and this track along with "Falling off the Edge of the World" are two really good examples to showcase just how painfully repetitive the songwriting gets on Mob Rules. Geezer's bass has been lowered in the mix, I liked how loud it was on Heaven and Hell, they'd really gotten it perfect on that album, and it's not really bad here either, I can still hear him, it just doesn't hit me nearly as hard this time, and that's a shame because he's really contributing quite a bit to songs like "Turn up the Night" and "Voodoo". Finally, you've got "E5150", a song whose title always eluded me until I discovered that if you replace the numbers with roman numerals, the title translated to "Evil". There's nothing evil about "E5150", it's a really minimalist take on an instrumental with some strange synthesizer and keyboard effects to go along with a doom metal riff played by Iommi.

On the plus side, Ronnie sounds great, his vocals are just as smooth and pristine as ever, his voice really adds a lot to some of the weaker tracks such as "Sign of the Southern Cross" as he sings his heart out. I think Iommi's approach to the guitar has changed ever so slightly on this album as well, the last album found him really honing in on more focused sounding material, this album continues that trend, but I have to say I think his playing has become a bit more creative and even melodic at times. "Turn up the Night" features these speedily delivered licks that create the illusion of shredding when in reality it's just two notes being played back to back, but the soloing on said track is where I think he's started to shine. When it comes to riff writing, Iommi has always reigned supreme, but his solos always fell pretty flat in my opinion, this album seems to feature the opposite, less of an emphasis on great riffs, more of an emphasis on melodic and memorable soloing. Not all solos are created equal however; sometimes they fade out with the song, which has always been a pet peeve of mine. If you spent all the time and effort to comprise a solo, would you or would you not want it to be heard?

Right smack dab in the middle of the album we get the title track, one which I've always been disappointed by. It's highly energetic and isn't necessarily bad but doesn't really have much going for it either. Oh, sure, it has more personality to it than most of the other tracks on here, but I always found it to be a little lame. Repetitive songwriting strikes again, but it's more than just that, it's just a really two-dimensional song, without much to go off of. I mean think about it, think about the title track to the previous album. Remember the peaks and valleys of "Heaven and Hell"? "Mob Rules" is a much more linear experience, both the song and the album for that matter. Perhaps "Country Girl" would've been a better song to represent the album believe it or not. While I'm also not a huge fan of this song, I do appreciate the soft mid-section to add some variety to the song, and hell, Vinny Appice does some drum fills for crying out loud! Okay, I know the absurdity of calling a Black Sabbath album Country Girl, but hey, don't blame me for throwing it out there, they're the ones that came up with the song title, and when I was listening to this album for the first time, I couldn't shake how uncomfortably awkward it was that they had a song called "Country Girl" on here. Seriously, it sounds like a Crosby, Stills and Nash song title and it's on the same album with "Falling off the Edge of the World" and "The Sign of the Southern Cross".

Which brings me back to why I don't like the title track, it's sounds kind of hokey, forced even. Like they're trying really hard to fit in with the Tygers of Pan Tang's of the era. I really dislike "Slipping Away" for the same reason, it's hokey as shit, damn near injecting the album with a dash of really uptight funk. To say that Mob Rules is an unfocused effort by a couple of coked up wash ups is kind of an understatement in these regards. Mob Rules doesn't suck, but even had he stayed in the band, it wouldn't be too long before Black Sabbath would start writing some of the least impressionable material in their entire career. Seventh Star anyone? I'm not a huge fan of Born Again either while we’re at it. If mid-80's Sabbath albums were an era of United States presidents, they'd be directly compared to those that held office throughout the 1850's, fitting right in with the Millard Fillmores and James Buchanan. Dio seemed to see the writing on the walls, while the rest of us are still trying to decipher whether or not there's a hidden message on the album cover that says "Kill Ozzy" on it. Yeah, maybe it does say that, perhaps Geezer told the artist to put something like that in there to signify this album as their response to "Blizzard of Ozz". If this was the laurels in which Mob Rules was founded on, to compete with Ozzy, I think they are really missing the bigger picture... either way it's a pretty lackluster album apart from a few special moments here and there.

Superchard gets super hard for:
'Turn up the Night'
'Voodoo'
'Over and Over'