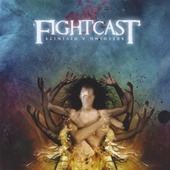 Italy’s FIGHTCAST had been getting very strong hype throughout the industry, touting them up as a band that could rival both IN FLAMES and SOILWORK for power and intensity. What was really on the CD was not even close to any of that level of hype, making you feel like when you were eight and had gotten plain white tube socks for Christmas instead of that video game you wanted.

This band gives nothing close to new here in the way of music, showing that they are not even trying to break any new ground. FIGHTCAST's so very uninspired singing and unimaginative playing make it difficult to objectively listen to it, even the lyrics the band has written seemed to border on the lifeless side. I usually give any CD three spins before I start to write what I think down, I got through one and a half listens barely.

I could go into each little detail of what this album really does not offer, slamming them harder than any football player hitting the line on fourth and less than a yard... but it would be as repetitive as the music that I am reviewing is. The best way I could serve the people who read my reviews is to give it to you as straight forward and with every little bit of honesty. Breeding a Divinity is not worth even one listen... and begs to be overlooked at all cost, and thankfully moved into a bargain bin at some dollar store in a far off town.

My advice to true metal fans is simple, and comes from years of experience- put in your favourite CD... listen to it as loud as you can stand it and it will put the name of FIGHTCAST out of your mind forever. I myself, put in the Immortal Souls: Winterriech disk.... I feel so much better now!!