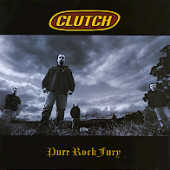 I'm beginning to think that every album that is absolutely phenomenal takes a few close listens for the listener to even understand that fact.

It happened to me with In Flames' Clayman, Pantera's Vulgar Display, a few Iron Maiden albums, and all Tool. It happened again with Clutch's Pure Rock Fury. As a long time fan of Clutch, I was hoping for no less. Satiation is a wonderful thing.

When I first got the album, I was a little irritated because it felt like there were maybe three good songs, my favorite being probably the heaviest thickest sounding one, Immortal. Of course, despite my disappointment I was infatuated with this song, roaring it out in my head all day long.

Come a few more close listens later, I realized that this album wasn't just riddled with greatness, it was bloody built with the stuff! Mean tracks blasted out by the manliest of men like Open Up The Border, Sinkemlow, and Frankensteinalong with the testosterone injected artistic uniqueness of wild tracks like Drink To The Dead and Red Horse Rainbow that only Clutch can do have me thoroughly pumped with… well, not to be a dork but… Pure Rock Fury.

Tim Sult, the crunching six-stringer for Clutch, isn't just a guitarist, he's a major part of the music's backbone.