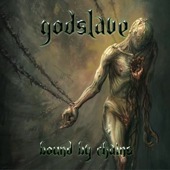 Thrash Metal is making a considerable comeback right now, clawing its way back up from the depths of the metal underground scene. With that said, Germany’s Godslave is one of those proud bands battling it out to become the thrash kings of the hill with it’s release named Bound By Chains.

This Mystic Arts Media release is so damned intriguing... but clearly it has more than a few flaws, along with a band who seem to struggle on a few of the songs as well. With the bad points out of the way, it is not all bad for Godslave.

The band really does deliver rather good basic thrash metal, obviously earned from listening to thrash spawned earlier on in their country (Kreator, Destruction, etc.) and even are clearly making a rather large effort to find their own originality. With all of these little clues down on this album, and adding in my metallic optimism... it shows that Godslave is a band of immense promise.

It is not a perfect album, far from it... but it is well produced by Bernhard Lorig and Siegfried Schussler, who seem to know that this band are on the road to something way bigger than what they are right at this point. The band should use this experience as a tool for themselves, and come back with a second album sometime early in the new year. I will go out on a limb here and predict that Godslave is not finished showing all of us what they can really do.