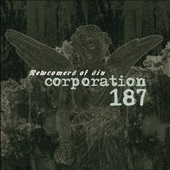 This band come to you straight from Linkoping, Sweden... a small city near the Death Metal Mecca of Stockholm....and that is where the connection really ends. Corporation 187 just is one of those many uninspired Death Metal bands, unfortunately from a country that knows its Death Metal.

Corporation 187 tries it hand at making some melodic style of Death Metal, but it does not seem to get itself fully rolling in that direction. The band itself seems to be able to play more than just adequately, and the vocalist does have that well honed growing voice that seemed to be rather good. The fact is that it all seems all to be thoroughly uninspired and even could be classed as a little 'clunky' in the way each song has been presented.

This project is like a race car without the famed Nitrous for the extra boost... no matter how good you drive, you can't blast it into the next gear. These guys have no Nitrous Oxide tank on board to even try and get themselves going the way they should... the seem satisfied to just hack and slash along in metal mediocrity. The production adds absolutely nothing and even seems to bogs everything down in a quagmire of sound, making it even harder to get into. The lyrics seem pretty good.. But it is far to little... way to late.

Give "Newcomers of Sin" some last rights and take it for a merciful (and very swift) burial... Corporation 187 needs to declare themselves bankrupt as soon as possible... but in saying that, if they go back and put a better effort out... they just might put out a better product than this.