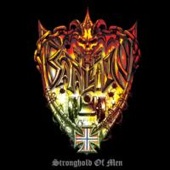 Not enough of old school metal? Here's one more for you. The Batallion marches from Bergen, Norway. Drumbells signal the battle will be very quick. Retaliation. The group is new but not these four metal soldiers, mercenaries who already executed their skills in many notorious Scandinavian bands, bands like Old Funeral, Taake, Bomber.

This is 100% ferocious thrash black speed attack, punk-quick and effective [hails to Amebix, and Discharge as well]. These tracks are anthems to the past gone. Adding to vocalist Stud Bronson raunchy, snarling, vehemently whiskey roar are killer sing-along reffrains, morbidious riffage and mayhemic soloes. The weapons' usefull handling is obviously above average. I like this band cause they don't take the shit too seriously; they enjoy themselves. It prooves itself for example in a track like 'The Spirit Of Masculinity' where lines like “It's an explosion / Of Testosterone” can be heard :)
Pump up the volume, grab a bottle of beer and be metal.