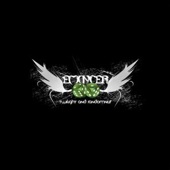 Metallurgy is one of the most ancient arts.
It is the technique and science of extracting metals from their ores.
A piece of metal being malleable can be changed and converted into desirable shape as one pleases.

Emancer is an excellent example of such alloy and believe me, it is not some ordinary steel but rather stainless steel. After getting acquainted with their 5th album I must say it is a piece of meticulous, to the smallest detail, nearly mathematically worked-out, material. Mithrin, the mastermind behind Emancer, must have spent a lot of time in Oslo with Tom Kvalsvoll, the producer. There, in STRYPE AUDIO, Emperor, Windir and Ihsahn have recorded their serially perfect music.

While this is predominantly mid-tempo modern black [dark] metal release moments of unexpected weirdness occur. Quasi-industrial machinations [a la Appolyon Sun] changing into ambient-like keyboard passages evolving toward eerie slow-downs: all of these abrupt [not Abruptum :] listener attention once in a while.
This juxtaposition of different moods, styles is sometimes evident within a single track range, a technique which reminds me a bit of what Opeth is most famous of.
Metallers! Do not be fooled here though; there's plenty of anger & aggression in the play. I hear here some parallels with Limbonic Art, Ulver, late Satyricon, Borknagar. The guitars, dominant in the mix, are razor sharp. With thrash attacking speed the riffing is surprisingly melodious. Pounding bass, bombastic drums kick with metronome-like accuracy. Throughout the 60+ minutes a listener perceives rough throat' bursts but clean singing surprises in few places. The use of Luke Rhinehart' poem fragment in 'Dice Man' justifies this album cover and title:

"...I will fear no evil: for Chance is with me:
thy two sacred cubes they comfort me...
Surely goodness and mercy and evil and cruelty shall
Follow me
All the days of my life
[And I will dwell in the house of Chance forever]"

Some malcontents might argue if it is still a black metal release. It is true there's more experimental and complex sounds on here to call it 'the blackest of the black'. The disc won't probably be straight forward enough for the majority of extreme metal fans but for those inclined for some [a word rarely identified with black metal] progress it'll rule.