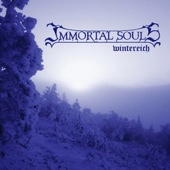 Hailing from the snow swept land of Finland, this melodic death metal band has done a hell of a CD... and put light back into Metal.

Mixing in your face, totally melodic Death metal riffs with lyrics about the usually unspoken darker side of Christianity, Immortal Souls have made the dark lord himself pretty happy with the band... until he actually saw what the message really was on this album.

With lyrics like in the song Fearreaper : "Layers of man, layers of Judas, layers of Jesus... Oh, fear is all I reap" they paint the picture of how fear and then retribution is a constant element in Christianity. Its simply brilliant. The circling and always haunting guitar work of E. Sarkioja which match the growling and spiting vocals of the lead singer, A. Sarkioja... helps paints the dark image of bleakness that most churches would implode if they heard them, but end up showing the brightness of the Christian lyrics in the end.

I would have to say that this album is one for anybody who wants to get scared, then get a second opinion of modern religion in the new millennium.... this album will do it.