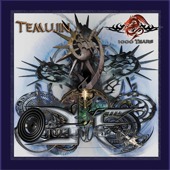 This Goth/Metal duo us from the land down under...Melbourne Australia to be exact, and crosses my desk. Don’t know what their name actually means... but it surely gets attention right off the bat.

They seem to be musically very impressive and rather stunning... unfortunately they are a rather good mix of Evanescence with the musical heaviness of someone like Nightwish. Don’t get me wrong here, the lyrics that the lead vocalist, Kelly Lean comes up with are as poetic as any that I have heard, along with some punch... but her vocal style is not quite original.

Kelly Lean sounds almost exactly like how Amy Lee of Evanescence does to the point of being rather a spooky mirroring of her. The tone she holds, the power and even some of the phrasing that has been used musically... makes her sound very close to Miss Lee. I usually don’t like sound-a-likes at the best of times, they usually made me cringe at the best of times... but I found Temujin was able to rise over the comparisons and has started on the road to their own voice. I had always wanted the band Evanescence to have their music go way more heavy direction that what has been put out there, so I was so glad when I found that Temujin shows exactly how it could be.( Hey, Amy... check it out).

The music, although put together with a myriad of MIDI tools, computer enhancements and guest musicians..."1000 Tears" is a pretty solid album. Recording wise it suffers a little bit, but that is only minor. I hope Temujin becomes a full fledged band, with permanent players.... Two members are great... getting the right people and letting it all flow, would just make them better.

This gothic twosome is clearly going places, and the band can’t help but get better and better. I look forward to hearing the next album.... and hope that they have stepped out of the shadows of these other great bands to forge a style all of their own. It they did, I will be listening.