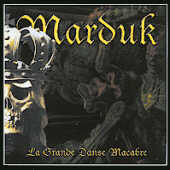 La Grande Danse Macabre was Marduk´s seventh full-length and also the closure of the trilogy of albums that Marduk tributed to the "true" meaning of black metal in their cosmovision. Moreover, this trilogy was also a eulogy to the Swedish pioneers of black metal, Bathory, and their seminal record, Blood, Fire, Death. Therefore, Nightwing was the blood album, Panzer Division Marduk was the fire album, and La Grande Danse Macabre was the one dedicated to death. Nevertheless, the conclusion of the trilogy was irregular but at the same time seeded down some interesting ideas that sprout in the next record, World Funeral.

On one hand, the first aspect that I found inconsistent in this record was the tracklist. I think that to start with two instrumental tracks, Ars Moriendi and Pompa Funebris 1660 it’s nonsense. The problem here is that song number two gets sandwiched between the instrumentals, so, the cohesion is affected early in the recording. The beginning of the record is hard to follow, the two instrumentals are mid-tempo oriented, following a doomy vibe that contradicts Marduk´s straightforward violent efforts in the not-so-distant past (see Panzer Division).

On the other hand, the second problematic point is lyrical themes. As far as I understand, each album of the trilogy has a specific subject matter and thus a specific sound to match lyrics and themes. However, In La Grande Danse Macabre themes seemed to vary from references to a majestic funeral of a king of Sweden to the stereotypical blasphemy of black metal. The theme of this record was supposed to be death but lyrically it falls short of imagination becoming campy and childish. For instance, titles like Death Sex Ejaculation and Jesus Christ… Sodomized aim to be blasphemous but fall into the category of just puerile. I consider that if you are offering this record as a tribute to the banners that cemented the black metal subgenre, you have to be more careful about songwriting and write more serious songs, something resembling the glorious days of Opus Nocturne or Heaven Shall Burn.

Musically speaking, the album goes from mid-pace to fast-tempo songs. The slow tracks have an atmospheric and solemn ambiance with doomy vibes and a lot of building before reaching climax. My favorite song in this fashion is Summers End because the build is memorable before some more straightforward black metal attack. The fast-tempo songs have the Marduk trademark of unmerciful blast beats and fast tremolo guitar picking. Tracks to highlight are, for instance, Bonds of Unholy Matrimony and Azrael; I think that the production is the typical Abyss studio mix with pristine and balanced instrumentation. Each of the instruments shines on its own and they don’t seem to overshadow the overall sound. I would say the bass sounds think and robust and that´s something I appreciate principally in black metal recordings because in most black metal acts the bass gets buried in the mix. In the vocal department, Legion is competent as always, and his performance is decent for Marduk´s standards. Morgan's guitars deliver fast tremolo-picking passages but he also takes the time to develop some engaging melodies that will be used better in future releases. In the drums Fredrik never disappoints and blasts his way from A to Z; unfortunately, this was his last full-length with the band.

All in all, La Grande Danse Macabre ends up being a middle-tier list Marduk album. It is not the worst but lacks effectiveness, especially in the songwriting and track-list aspects. Most of the songs are bland and have a campy attitude making them feel puerile. A few of their songs are attentively written and executed. A more careful and astute approach would have elevated this record as a more appropriate closure for the black metal trilogy. Anyways, the band has had ups and downs in their career as most bands show consistent recordings after this one. Perhaps those will be reviewed in the future.

Wasn’t this opus supposed to be even faster and more brutal than "Panzer Division Marduk"? I guess after 10 years of leveling everything that moves, it was the time to show a little softer side of Marduk. I'm not saying this album is bad, but I thought that extremists like Marduk would always deliver intense blasphemous releases full of hate and blood.

Before this review becomes a list of upsets about this album, I want you to know that I quite enjoyed this epic and I simply wasn't the one who said it would be faster and more brutal than "Panzer...”. And since it isn't I can't write superlatives without pointing differences between what's said and done. What I mean by soft is slow and the most unexpected is melodic tracks. Take "Bonds Of Unholy Matrimony", "Summer End" or almost 70% of all tracks have more or less melodic lines which I can sing while shaving. I remember cutting my throat trying to do this while listening to "Panzer Division Marduk". There are of course moments of old Marduk with tracks like "Azrael", "Death Sex Ejaculation" or "Jesus Christ... Sodomized". The last one, by the way, reminds me the most of Marduk from previous release, but I’m afraid it won't be enough for some old school black metal fans. On the bright side, because of the Marduk's softer side "La Grande Danse Macabre", which ranges from fast and violent songs to atmospheric-doomy tracks doesn't get boring after a few spins. Another fact worth mentioning is production. Marduk finally showed all those "real" black metal bands that shoddy recordings would never hide fluke playing or composing skills. Although some of their riffs are not top quality and leave a rushed and unfinished feeling, at least crystal clear sound let's you hear all instruments without sticking your ear inside of the speaker and allows you to fully enjoy the recording.

Bottom Line: Overall it’s quite an interesting album, but leaves me with a half-empty feeling of just another black metal album on the long list of metal CDs. From one of the best I was expecting a hell of a lot more.