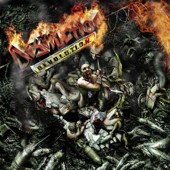 Originally from Germany and founded in 1982 under the name Knight of Demon, the band decided to change their name to Destruction after a few weeks. They've undergone several lineup changes over the years and seem to have found their most solid one that is currently featured on this album. This includes, Marcel "Schmier" Schirmer on bass/vocals, Mike Sifringer on guitars and Marc Reign on drums. They seem to function better as a 3-piece outfit but for this release they did include several guest backup vocalists and lead guitarists. With Mike doing the riff-writing, Schmier taking the responsibility behind the lyrical concepts, and Mark staying up to par on the drum set, this seems to have formed a more solid foundation for the band.

Over 25 years in the musical arena, Destruction has been playing thrash metal that has been musically driven by Mike. These 10 tracks show, without any question, to be another very mature and comprehensive release. Mike's riff-writing concepts exhibit many galloping structures with songs as well as technical bits that accompany Schmier's unique vocals. The songs output is intriguing, catchy and energy stricken. In addition, they are entirely flawless arrangements. They are displaying very uniquely driven original tracks. The beginning of the album features an acoustic guitar riff melody which flows perfectly into a heavily crunch tone guitar assortment throughout the song and, for the most part, the entire album. This paves the way for an allotted and ingenious array of songwriting structures.

From a musical aspect, the title track seemed to catch me the most out of this entire album. The rest of the songs still show a solid assortment of riffs, which captures Destruction fans as being a sound and uncompromising outfit, which never cashed in on their musical style just to sell records. Besides the title track, the whole album exhibits a heavy tone to it, which remains one of the band's best songwriting releases since The Antichrist back in 2001. "Inventor of Evil" didn't catch me as much as this current one because I found it to be a little staler within the songwriting components. "D.E.V.O.L.U.T.I.O.N." is a monumental concoction that catches the ear with an utmost of well-engineered tracks. This entire release clocks in at around 50 minutes in length.

Mike's rhythm guitar work is much stronger than his leads. This has always been the case which is probably why Destruction chose many guest lead guitarists. In no way do I discount his talent, but his rhythm guitar riff executions are very technical though his solos are not. They seem to be more improvised and lack a fundamentally based assortment of works. He doesn't seem to reflect much clarity in designing solos that contain arpeggios, sweep picking and highly tremolo picked outputs. As a result, Destruction sought out other guest lead guitarists because Mike falls a bit short in this department. Schmier and Marc follow Mike's rhythms with utmost precision. Schmier's vocals sound like no other thrash metal act in existence. He displays a style which is wholly original and highly sophisticated.

In regard to the lyrical writings, Destruction focuses on a plethora of topics here on this release. Schmier writes about his views on religion. If you research his profile on Destruction's official website, he refers to religion as being the biggest lie of mankind. Other topics here include his perception on politics, addictive drug use and heavy metal music itself. These are a broad range of writings that seem to make up the whole of Destruction's past and current lyrical concepts. During the 1980's era, Schmier focuses mostly on Satanism and anti-religion aspects. His writings on this release shy away from those previously stated. Another note to add, the US version of this album does not feature the Tank cover that's on the Japanese release.

Another classic and monumental thrash metal release Destruction belts out once again. "The German Thrash Metal Legend" still remains in effect and without a doubt does not disappoint the listener whatsoever. Originality in the guitar riff writings, the wide plethora of contributors both on leads and backup vocals, puts this release amongst one of the finest in years. It's another definite classic because of the songwriting, the production sound, the unique guitar works and sets Destruction in a thrash metal category of its own. Songs to check out if you're not convinced would be the title track, "Offenders of the Throne" and "Odyssey of Frustration." If you're keen on the genre of thrash metal, don't let this release shy away from your collection.