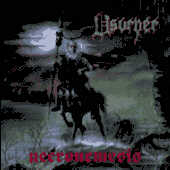 Necronemesis delivers some worthy riffs and catchy parts but overall it’s nothing too unique. Unlike so many metal bands today who constantly strive to be the most brutal band, most melodic, fastest, whatever... currently, Usurper seem content with just taking it easy and producing a ordinary death/black crossover album, with all the tried & true methods.
Nothing special or unique, yet the album never gets boring, either very slow and brutally heavy, or fast and chaotic, all the songs have a nice beat and something that makes them great. The vocals switch from semi-death grunts (a lot clearer than pure) and black metal rasps. King Diamond does some truly pitiful vocal contributions on the title-track, I just can’t stomach this guy!

Unlike the majority of extreme metal bands, it looks like Usurper spend as much time on lyrics as they do on their music. Interesting topics about occult, religious, and extraterrestrial phenomena and amusing urban legends, with detailed write-ups beneath the lyrics, describing that particular topic. "Spawned of cosmic dust, into human form. With the fear of death, man invents his gods..." nice lyrics indeed.

My favorite track is definitely "Deathwish", a nice steady beat, simple guitar shredding and really catchy vocals on the pre-chorus. And the intro to "Into the Oblong Box" - the last track, is just awesome, slow and crushing. The same song keeps running and plays nothing for about 30 minutes after it’s over, and only then, there’s a weird, repetitive, 5-minute chant and the CD ends at a total running time of 72 mins.

Bottom Line: Unless you want a completely normal metal record, spend your money on something else. I hear Peccatum are doing some totally weird and innovative things with metal...