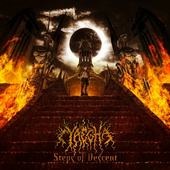 I researched things behind this band's name, and came up with something interesting. Cyaegha is the name of a mythical beast of hell from what seems to be German folklore. It seems that this beast actually had a cult dedicated to it in a few villages until somewhere around the early 19th century. As I listen to the debut album while looking up the information of the name of the band... I can see why they picked the name. I wanna join the cult now!!

Hailing from the laid-back state Virginia, Cyaegha creeps out of that tranquil and picturesque area and ends up unleashing something that is far removed from that area. Mixing ear bisecting Death Metal with a generous attacking of malevolent Black Metal stylings... this band thunders out and unleashes themselves for the world like a tidal wave of guttural vocals and soaring guitar work.

Uncompromising as anything out there, they also show just how musically tight they truly are. Technically distinguished, Cyaegha show that extreme metal is way more than just a whole lot thrashing going on. I loved the melodies because they were catchy, yet so damned heavy as well, and the way they used influences from HP Lovecraft among other authors.... they have amazingly melded all of that together and have got one of the best metal bands I have came across.

Cyaegha is truly a band that has so much going for them in the intelligence department, not to mention the fire to play amazing music. Truly they are equally thinkers as well as heavy hitters... There is no substitute for either of those in metal. The fact that they possess both in great amounts... makes them so dangerous. So if you want to give your brain a workout, as well as your neck muscles... this is the band that fuels the need for both.