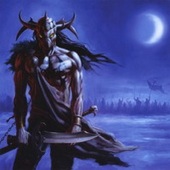 Shades of classic MAN’O’WAR and the infamous PILEDRIVER paint every single note of this American mid-west’s THE HORDE’s first release . From Empire to Ashes is a rather fun and unserious album, one that is just chocked full of pure fun.

Mixing together all of the old metal lyrical standards of wizards, swords and battling dragons in to their music, the band thunders and pummels you through every heavy metal cliche there ever has been. THE HORDE swaggers, strut and thump their chests like wild cavemen as they sing of epic battles waged between good and evil..... It is MAN’O’WAR all over again... Good times a plenty here.

It may not be the next step for metaldom, but having that ‘just because it’s fun’ vibe to it that makes this album a great listen. Cheesy would be the term I would use THE HORDE overall... but in a world that has enough crap in it, having a fun time listening to this album is more than worth it. This clearly shows that fun and fantasy has not totally disappeared from metal. I like cheese, and this was pure gourmet at it’s finest.

Hail the missing art of cheesiness in all of it’s form. It is not the best album out there but it packs a lot of fun into thirty two minutes and thirty seconds. Call the cows in from the field right away... THE HORDE might need more milk to make more of that cheesy goodness they deliver so well.