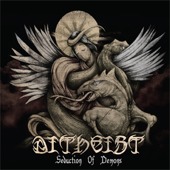 Black Metal is the type of music that when it is done right, it is some of the best metal around... if it is not done well, it is nothing but garbled noises that no metal head wants to hear. That said, getting this EP from Chicago Black Metal band, Ditheist... I now had to make that determination either way.

This short album has only four songs in it’s silver hold, but is packaged amazingly good for such a short album. The artwork made by someone calling himself Tatomyir and is absolutely incredible and seems to set the tone for the EP itself, at least visually. This is one of the best album covers I have seen in a very long time, and that made me hope that Ditheist "Seduction Of Demons" was going to be as good as that was.

The CD opens with the track ‘Vengeance Is Mine’, and it automatically sucks me in like a raging whirlpool of heaviness and destruction into the pits of hades... assaulting me with such an unholy orgasm of thunder of guitars that harken to the old school BM and has a touch of death metal in there for good measure. In turn, ‘Thrown Into Oblivion’ and the title track explode out and solidify that these guys know what it is to make truly sick and twisted Black Metal. It simply flays tour mind with razor sharp yet heavy laden guitars and blasting drum beats that seems to be stoked by pure hell-power.

By the time the last track on this album fades off, you are going to really know that Ditheist is a Black Metal tour-de-force that is to be taken seriously. It does not break new ground, true... but they still are showing all of that great promise in a small package. My only hope is that they will actually put out a full album, rather than waste valuable recording time doing another Extended Play CD. The only drawback to the whole thing in my opinion... was that they put out a EP.